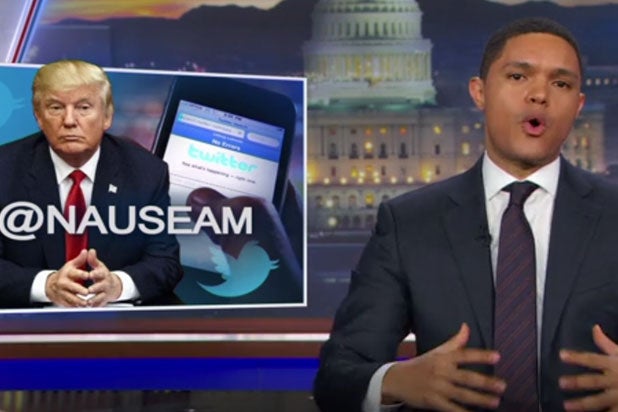 In the wake of Donald Trump’s weekend Twitter tirade, Trevor Noah says we shouldn’t fear our president-elect, and instead be afraid of his enablers.

Noah then showed clips of Mike Pence and Kellyanne Conway on different talk shows, defending Trump and his Twitter tantrums. Noah added that we should think again if we thought Trump would stop his Twitter tirades once he was elected the next president.

Also Read: Trevor Noah Warns Against Extremism in Post-Trump US: 'Divided People Are Easier to Rule'

“In one weekend, the president-elect tweeted about Taiwan, a plant in Indiana sending jobs to Mexico, and then, for some reason tweeted about Tiger Woods, tweeted about China devaluating its currency, he bitched about ‘Saturday Night Live,’ called Jill Stein a con artist, then, of course, plugged a re-run of a Fox News special about his apartment, and went onto a tweet storm about America’s trade policies!” Noah said. “I mean, this guy has so many tweets, this guy’s on the toilet a lot!”

Noah added, “Usually, there’s protocol to a presidency… it feels like Donald Trump is too casual. It’s the highest office in the land — it’s not normal. It’s like seeing the Queen in sweat pants… it’s not normal!”

But on the bright side, added Noah, we will always know what Trump really thinks.