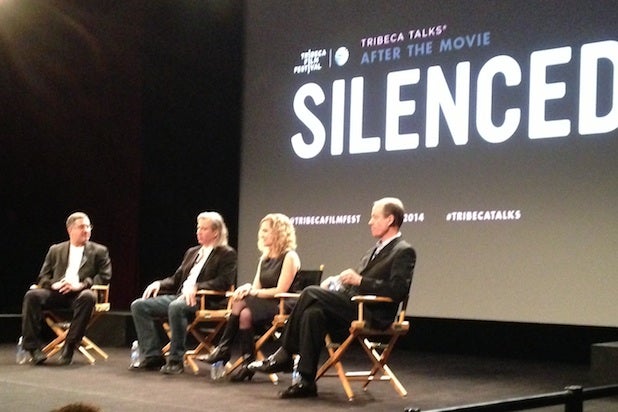 Government surveillance, abuses of power and the supression of dissent kicked into high gear after 9/11, one documentary argued at the Tribeca Film Festival on Saturday night.

But the whistleblowers who exposed recent activities were hardly breaking new ground, because some of the same things were going on more than four decades ago, another Tribeca doc pointed out.

Both “Silenced” and “1971” tackle issues that reverberate in light of Edward Snowden’s recent disclosures of the extent of domestic spying, and the risks some citizens take to expose activity they feel subverts the Constitition. The two films made for bracing and frightening conversations both onscreen and off during the festival’s first weekend.

One key point: Disclosure of illegal government activities was a lot more damaging to the presidency of Richard Nixon, driven from office in 1973 because of government abuses and the subsequent coverup, than it was to the administrations of George W. Bush and Barack Obama.

“The things that were illegal in Nixon’s era are now legal under the Obama administration,” whistleblower and former National Security Agency staffer Thomas Drake said following the premiere of James Spione’s “Silenced.”

Drake is one of the subjects of “Silenced,” and a participant in the Q&A that made up part of the festival’s “Tribeca Talks” series of post-screening conversations. Another subject, attorney for former Justice Department lawyer Jesselyn Radack, was also on hand; the third, onetime CIA agent John Kiriakou, is serving a 30-month sentence in federal prison for confirming the name of an undercover agent to a reporter.

Drake and Kiriakou were all charged with violating the Espionage Act, a 1917 law that had virtually nothing to do with whistleblowing and had been used less than five times in 90 years before the Obama administration dusted it off.

“I had to finish the movie quickly because I wanted to be timely with the Edward Snowden revelations, but also because it could be a never-ending story,” said Spione. “While we were making the movie, there were six Espionage Act prosecutions under Obama. Then seven, then eight.”

At the same time, he said, the extent of government spying on its own populace has been shown to be far more extensive than he initially imagined.

“I don’t know if there’s any such thing as paranoia anymore,” he said of the Snowden revelations. “The scope of the program is just enormous.”

“Silenced” makes the damning case that the federal government, in hanging onto the expanded powers granted after 9/11, selectively uses the threat of prosecution not to go after true spies, but to harass whistleblowers for revealing illegal activities or government scandals. In the film, executive produced by Susan Sarandon, Spione artfully mixes three case studies from three different government agencies: Kiriakou spoke out against the use of waterboarding, Drake found the NSA hiding from Congress its culpability in missing signs that the 9/11 attacks were coming, and Radack grew incensed that the Justice Department was trying to hide emails that proved it ignored American citizen John Walker Lindh’s constitutional rights.

All three spoke out – “If I remained silent, I’d be complicit in the subversion of the American Constitution,” Drake says in the film – and all three were charged under the Espionage Act. Only Kiriakou, who has young children and could not afford to fight the charges and lose, went to prison; the government dropped the charges against Drake, and was scolded by a judge for bringing them in the first place.

Radack is now director of national security and human rights at the Government Accountability Project, and counts Snowden among her clients.

Also read: Nas at Tribeca: 20 Years of ‘Illmatic,’ Minus Homophobia

Although Spione’s film is at times heavy-handed in its use of portentous black-and-white reenactments, it is effective is showing how the weight of the government can be used against citizens under the anything-goes heading of the War on Terror.

“The biggest leaker of classified information in our nation is the U.S. government,” said Radack in the Q&A moderated by Pulitzer-winning Washington Post journalist Barton Gellman. “It happens on a daily basis to make themselves look good. But if someone does it to expose the biggest scandals of my generation, the full force of the government comes down on you.”

When an audience member asked if people who aren’t doing anything illegal should really be concerned about the government keeping tabs on their activity, Drake offered a quick answer.

“The phrase you use, ‘You have nothing to fear if you have nothing to hide,’ is attributed to Joseph Goebbels, the Nazi minister of propaganda,” he said. “If you lose the First and Fourth Amendments, we’re no longer America. It’s that simple.”

In a fascinating backstory to the events chronicled in “Silenced,” Tribeca premiered Johanna Hamilton’s doc “1971” on Friday night, and ran it again on Saturday. Her film also deals with citizens uncovering government wrongdoing – but as the title suggests, it goes back more than four decades, to the height of protests against the Vietnam War.

“1971” details a break-in at the FBI offices in Media, Penn. in March ’71, in which eight activists stole bureau files and mailed them to press organizations. The files revealed a pattern of illegal infiltration and disruption of anti-war, black-power and women’s-liberation groups, exposing the abuses of Hoover’s bureau and identifying the incendiary Counter Intelligence Program, COINTEL-PRO, for the first time.

The revelations led to the first congressional investigation of the FBI, but the eight activists who staged the raid were never caught, and they never revealed themselves publicly until Hamilton’s film. Their story is both a cat-and-mouse thriller, told in well-handled reenactments, and an examination of the the abuses of government power that could hardly be timelier.

In the end, perhaps sadly, a line from “1971” may best sum up the message of that movie and of “Silenced.” Interviewed on tape more than 20 years ago, a former FBI agent says of the bureau’s abuses, “It’s the nature of government. It happened. It will happen.”

CORRECTION: The original version of this story said that Jesselyn Radack was charged under the Espionage Act. She was not.