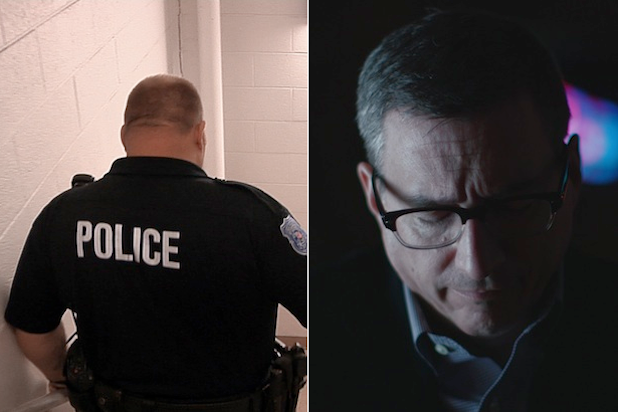 L-R: 'Tom Swift and His Electric Rifle,' 'Armor of Light'

Can a conservative dare take the lead in the battle for gun control? And is a gun substitute that’s designed to be non-lethal actually responsible for hundreds of deaths?

Those were questions asked at the Tribeca Film Festival over the weekend, as a couple of documentaries put firearms of all kinds in their sights.

“The Armor of Light” revisits the issue of gun control from an unexpected direction, while “Tom Swift and His Electric Rifle” questions whether the widely-used Taser is as safe as it claims to be.

Of the two, “Armor of Light” is the more provocative, because it approaches the gun debate from the perspective of a man who’s likely anathema to most liberal gun-law supporters: Rob Schenck, the conservative evangelical preacher who was a leader of the 1990s anti-abortion movement and is inextricably linked with conservative politics.

“It was my firm belief,” said director Abigail E. Disney after a Tribeca screening on Sunday, “that if we don’t step outside of anything done before, we will never advance the conversation.”

Gun-control advocates may well find Schenck an uncomfortable but useful ally. One audience member who introduced himself as the former head of the Brady campaign for gun control stood up during the post-screening Q&A and called the film “the most insightful communication of any kind that has been done on this issue.”

“Would you come down here,” said Disney (yes, she’s from those Disneys), “and tattoo that on my forehead?”

“The Armor of Light” draws its name from a Bible verse by St. Paul. Schenck began to reconsider his near-automatic embrace of gun rights when shootings mounted, particularly one in the Washington, DC neighborhood where he lives.

Spurred on by a mother who began an anti-gun crusade after her son was gunned down at a Florida gas station, the staunch anti-abortion activist decided that being pro-life and pro-gun are incompatible positions.

But he was well aware that his new stance put him at odds with followers and colleagues who typically agreed with conservative Republican and Tea Party rhetoric on the subject — i.e., the NRA’s talking points.

“When faith becomes inextricably linked to a political position, perhaps we become vulnerable to selling our souls,” Schenck says at one point in the film. And later, he adds, “We must be very careful we don’t put the Second Amendment over the Second Commandment.”

Schenck’s evolution is gradual — or, at least, his decision to take a public stand is. And the film spends most of its time watching Schenk agonize over his decision; it’s not until about 80 minutes into the 90-minute running time that he makes his first public statement on the subject.

The long wait for some kind of action is frustrating dramatically, though it does convey how agonizing the decision was for a man who thought he could lose some of his constituency, his funding and his position as chair of the Evangelical Church Alliance’s council.

In a Q&A after one Sunday screening, Schenck said that hadn’t happened: “Tensions eased, and I was unanimously reelected.”

One audience member asked a question that drew a spontaneous round of applause: “Is the reverend going to change is mind and vote Democratic now?”

“It’s all a wild card now,” Schenck said with a grin. “We need to focus on principles and not party labels.”

He paused. “There’s one conclusion I’ve come to that it could be a Democrat. That’s a long way from where I used to be.”

Where “The Armor of Light” deals with one of the hot-button issues of the day, “Tom Swift and His Electric Rifle” tackles a subject much of the audience might not even realize is controversial. Directed by Nick Berardini, the film deals with the Taser, the shock-administering gun that its sole supplier, Taser International, claims has saved hundreds of thousands of lives during its time in use by 17,000 law enforcement agencies in 107 countries.

The film presents fairly convincing evidence that Tasers are not as safe as the company claims — and, crucially, that the company knew about the danger of Taser-induced heart attacks as far back as 2006, but opted not to tell the law enforcement agencies using its product.

Publicly, the company continues to insist that “in every single case,” the reported 300 suspects who died after being Tased “would have died anyway” — and when they finally began to warn police departments not to shoot suspects in the chest with their devices, they told their clients the move had “less to do with safety and more to do with risk management.”

It isn’t until late in the film that “Tom Swift and His Electric Rifle” presents its most damning evidence, though by that point viewers may well find the obstinate bluster of Taser International’s executives reason enough to mistrust the company. The use of Tasers will never be the kind of flashpoint issue that gun control is, but the film does an eye-opening job of starting a conversation, a worthy accomplishment for any issue-oriented doc.