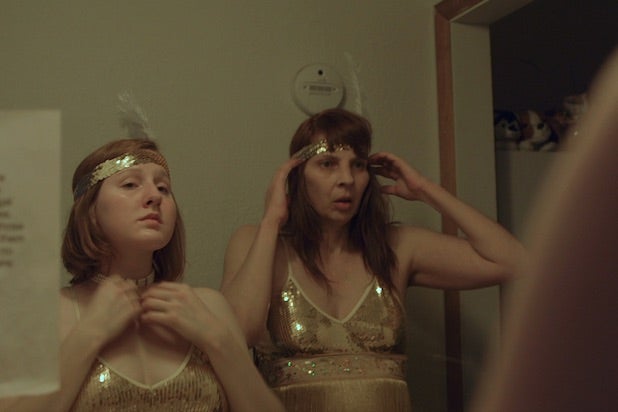 What is this thing called love?

That’s a question art has been wrestling with for decades. Countless works of literature have taken a crack at finding an answer, and just about every pop song ever written dwells on the topic, or at least fusses around the borders of the question.

And at the Tribeca Film Festival this week, lots of filmmakers have tackled the elusive subject — including two very different films that took an episodic approach, and found common ground mostly in their depiction of love as a messy, sad and formidable struggle with occasional moments of transcendence.

“Madly” relied on six directors from around the world who were commissioned to make short films exploring the topic; while the documentary “LoveTru,” is the work of a single director, Alma Har’el, who looks for love in three of the unlikeliest places.

As usual for ensemble films, the results are uneven. Wasikowska’s film is lovely but unsettling, a dreamy mood piece about a young mother whose baby constantly cries, with the line between reality and fantasy thoroughly blurred.

Bernal’s is a quiet character study of a woman whose marriage is tested by a child, while Silva’s heartbreaking story follows a gay teen looking for acceptance and finding it only in the riskiest of circumstances.

The best of the sequences might be Natasha Khan’s “I Do,” about a young bride who has a life-changing experience on the way to the church.

Together, they form something of an odd, kaleidoscopic meditation on the ties that bind and the ways they fray. “None of us knew what the hell the other people were doing,” Bernal said in the post-screening Q&A on Friday. “I knew that it would eventually be a dialogue, an accident, a conversation happening.”

“LoveTrue,” which also premiered on Friday, is a documentary that feels like a troubled but lovely fever dream, a look at three different subjects that mixes verite footage with re-enactments, and then deconstructs those sequences by having the actors talk to the real subjects.

The film moves between Alaska, where a young woman finds that being a stripper is a barrier to finding a lasting relationship; Hawaii, where a carefree surfer and doting father learns that he’s not the biological father to the young boy he’s raised as his son, but who was actually the product of the affair that broke up his relationship; and New York City, where a religious family struggles in the aftermath of the infidelity that shattered their parents’ marriage.

The film is beautifully shot by Har’el, whose last film was the similarly striking “Bombay Beach,” and put together in a way that never feels routine. Shia LaBeouf served as executive producer. (“I wrote a check,” he explained when footage screened at Tribeca last year.)

The Alaskan sequences are the film’s most affecting, while the Hawaiian father, with his mood swings and drunken outbursts, is the saddest and most indelible character. “I wish we could make a movie just only about good things,” he confesses at one point.

Like “Madly,” “LoveTrue” is about a few good things, but they’re hard to find and harder to hang onto; this is a chronicle of the pain of love, not the glory of love. But it is a spooky, bold and touching chronicle, an artistic and dreamy reminder that you shouldn’t always believe what you hear in those love songs.