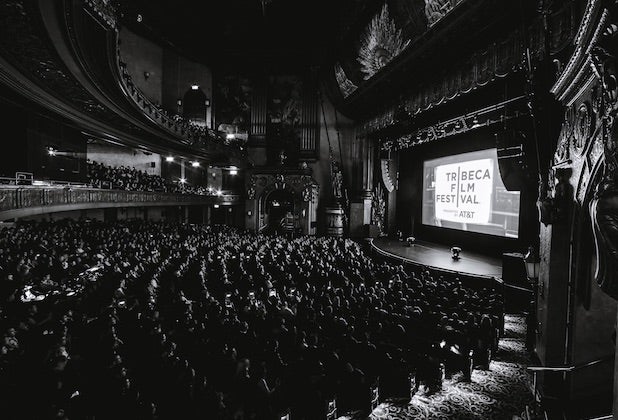 The Tribeca Film Festival has cut back on the films this year, but it has super-sized itself in other areas.

Even the moderators are impressive: Scarlett Johannson for Favreau, Dustin Hoffman for Baumbach, Robert Rodriguez for Streisand, Tom Hanks for Springsteen.

It’s tempting to say “who needs film?” at this film festival, except that film — or, at least, filmed or taped entertainment — is at the heart of most of these events. Even Bryant will be coming to Tribeca not to recap his basketball career, but to discuss his collaboration with animator Glen Keane on a short film.

(Granted, Springsteen’s chat with Hanks will likely be a lot more about music and culture than film, but it doesn’t matter what kind of festival you are — if Bruce Springsteen wants to show up, sit down and chat, you let him.)

At any rate, the 2017 Tribeca Film Festival embraces the wide view of what constitutes film by trying to keep pace with the blurring lines between cinema television and interactive entertainment, and between culture and politics.

And partly, that means downplaying traditional film slightly. Tribeca cut its film program by about 20 percent this year, a similar step to one that was previously announced by the even larger Toronto International Film Festival.

Tribeca is showing 98 films this year, with most of the screenings split between the Tribeca neighborhood of lower Manhattan and the Chelsea neighborhood further north.

Many will take place at a Battery Park multiplex located just steps from the site of the 9/11 attacks that caused Robert De Niro and Jane Rosenthal to launch the festival in 2002.

In the competition section, 20 narrative films (10 from the U.S., 10 from international filmmakers) and 22 documentaries will compete for prizes in front of juries that include actors Peter Fonda, Diane Lane, Christina Ricci, Priyanka Chopra, Willem Dafoe and Melanie Lynskey and filmmakers Barbara Kopple, Amy Berg and Amy Heckerling.

Out of competition, galas and special screenings include James Ponsoldt’s “The Circle,” with Tom Hanks and Emma Watson; “The Public Image is Rotten,” a documentary about Sex Pistols singer Johnny Rotten (now John Lydon); anniversary screenings of “Aladdin,” “Bowling for Columbine” and “Reservoir Dogs”; and a closing-night double feature of “The Godfather” and “The Godfather Part II,” followed by a conversation with Francis Ford Coppola, Al Pacino, James Caan, Robert Duvall, Diane Keaton, Talia Shire and De Niro.

Also Read: What Really Happened to That Oscar Statue That Marlon Brando Refused?

The opening-night film, which is often a documentary about a New York institution, will be “Clive Davis: The Soundtrack of Our Lives,” based on the autobiography by the celebrated record executive. It will be followed by a Radio City Music Hall concert featuring Aretha Franklin, Jennifer Hudson, Earth, Wind & Fire, Carly Simon, Dionne Warwick and the back-in-the-news Barry Manilow.