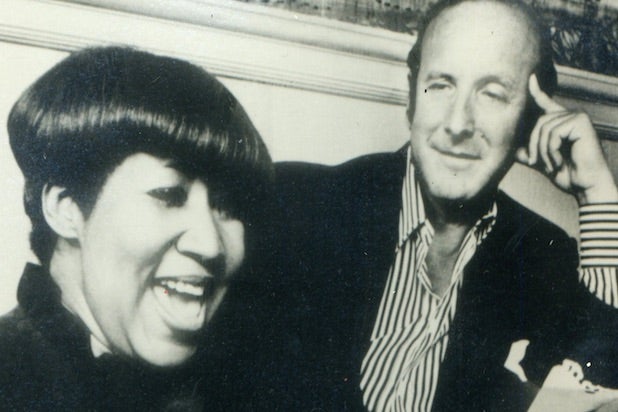 It has become a tradition of sorts for the Tribeca Film Festival to open with a documentary about a cherished New York institution, be it a person, event or thing. Last year it was “First Monday in May,” about the Metropolitan Museum of Art’s annual costume gala; previous years have included the “Saturday Night Live” doc “Live From New York” and “Time Is Illmatic,” a film about rapper Nas’ seminal 1994 album “Illmatic.”

And on Wednesday night at Radio City Music Hall, the 16th edition of Tribeca kicked off with the doc “Clive Davis: The Soundtrack of Our Lives,” followed by performances by a number of the artists who were helped or mentored by Davis during his five-decade career as a recording-industry executive with legendary “ears.”

Barry Manilow, Jennifer Hudson, Earth, Wind and Fire, Kenny G, Carly Simon and Aretha Franklin all performed – and as artist after artist took the opportunity to congratulate Davis on the film, the night started to seem more like an awards show than a movie premiere.

But that, in a way, was to be expected. “The Soundtrack of Our Lives” is based on Davis’ autobiography, and nobody came in expecting it to attempt to excavate whatever demons the man may harbor. The perils of an authorized film like this is that it can turn into bland praise, which the film sometimes does; the upside is if it becomes insightful as well as laudatory, which director Chris Perkel manages to achieve occasionally.

For the most part, “The Soundtrack of Our Lives” is an unabashed celebration of Davis, whose career includes signing Janis Joplin and Santana to Columbia Records in the 1960s, shepherding the careers of Barry Manilow and Patti Smith at Arista Records in the ’70s, and becoming mentor, booster and strategist for such diverse talents as Aerosmith, the Grateful Dead, L.A. Reed and Babyface, Puff Daddy, Alicia Keys and the brilliant but troubled artist with whom he is most closely identified, Whitney Houston.

For much of its two-hour running time, the film consists of one person after another -singers, fellow executives, family members – talking about how Davis has the magic touch, how he’s developed an uncanny knack for finding hit songs and how he finds the time for his family despite a schedule that would kill younger men. (Davis is 85.)

It would be nice to know a little more about how he does it – where he goes looking for songs, how he recognizes a diamond in the rough, and what in his background could have possibly allowed a young lawyer from Brooklyn to slip right into the presidency of CBS Records in 1967.

Davis himself is not the most incisive or introspective of subjects; he’ll tell you the facts of his life, in words that often come straight out of his book, but he’ll rarely give more than hints about how they made him feel. (It falls to the co-author of his book, journalist Anthony DeCurtis, to occasionally appear in the movie and delve into these areas more fully than Davis does.)

The film follows Davis’ career chronologically, with slightly diminishing returns. But it has some marvelous moments: Footage of Janis Joplin at the Monterey Pop Festival in 1967 is as electrifying as ever; a promo video of Davis reading the lyrics to Bruce Springsteen’s impossibly wordy 1973 ditty “Blinded by the Light” is priceless; and producer David Foster tells a great story about the screaming, obscenity-laden argument he had with Davis when the exec released a demo of Whitney Houston’s “I Will Always Love You” rather than the more polished version Foster preferred.

In a way, Houston is the key to the film, and to Davis – she’s both his greatest success story and his biggest failure. He found her when she was a teenager, oversaw her career highlights and then tried not to notice her escalating drug use until it was too late. Toward the end, he tried to intervene and get her into rehab, but her death came shockingly only hours before Davis’s 2012 Grammy party, which she was supposed to attend.

Houston’s fate gives the film a stronger emotional pull that it would otherwise have, but in a way it’s out of place in a film that is more focused on heaping plaudits on one of the key music men of the last half century.

Tribeca will showcase many more insightful, tougher and more substantial nonfiction films over the next 12 days, but that’s not the point of opening night. Wednesday was a party, from New York Governor Andrew Cuomo’s introduction of Tribeca founders Robert De Niro and Jane Rosenthal, to De Niro’s grin when he thanked the performers, “all of them fresh from NOT performing at the inauguration,” to those performers themselves.

Manilow opted not to refer to his recent coming-out announcement (which would have been appropriate, given Davis’ 2013 coming-out as bisexual), instead sticking to a polished medley of hits; Hudson did three Whitney Houston songs that got the crowd dancing; Warwick displayed an effortless grace on a couple of the songs she cut for Davis; and Aretha Franklin was Aretha Franklin, which is to say that she was difficult (she said she’s been fighting “an upper respiratory viral infection,” and only did two songs) and transcendent at the same time.

At the end of her second song, her Davis-engineered hit “Freeway of Love,” she went into a thrilling call-and-response segment straight out of the gospel music she grew up singing. You couldn’t help but think that Davis, a canny record man with his eye on what radio would find palatable, probably enjoyed watching that sequence from his seat about a dozen rows from the stage — but he definitely would have cut it from the recorded version to ensure that Aretha had herself a hit.

By the way, one aspect of opening night that would have passed unnoticed a month ago instead got a huge reaction. Among the array of advertisements that played before “The Soundtrack of Our Lives” was an ad for a premium flight experience called Polaris, which promises an unparalleled level of comfort and service. But when the ad ended with the revelation that Polaris is a service of the festival’s official airline, United, Radio City erupted into a mixture of derisive laughter and boos.

One can only imagine that the same scene will be played out before every other Tribeca screening for the rest of the festival.