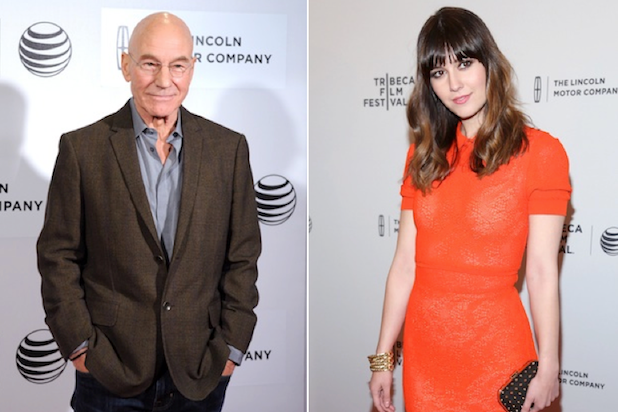 Mary Elizabeth Winstead and Patrick Stewart were two of the stars of the Tribeca Film Festival on Friday night, anchoring strong films that made their world premieres half an hour and a couple of miles apart. While Winstead was charming, subtle and quietly devastating in actor/director Chris Messina’s “Alex of Venice,” Stewart was gloriously entertaining but also heart-wrenching in Stephen Belber’s adaptation of his Broadway play “Match.”

“Alex of Venice” screened a little earlier and a little further uptown; directed by Messina, whose day job includes regular roles on “The Mindy Project” and “The Newsroom,” it stars Winstead as the title character, a lawyer and mother whose husband (played by Messina) abruptly decides to leave after spending too long as Mr. Mom.

The film includes a touching performance by Don Johnson as Alex’s father, a TV actor fighting dementia and trying to land a local theater role in a production of “The Cherry Orchard,” the mood and rhythms of which informs the lovely final scenes of the film.

But this is Winstead’s movie – and while her performance is understated, it reinforces what “Smashed” suggested two years ago: She is a terrific, underappreciated actress adept at bringing life, heart and humor to stories of women trying to cope in difficult circumstances sometimes of their own making, sometimes not.

(Another Tribeca film, “Goodbye to All That,” explores a similar situation – in this case, a man whose wife suddenly leaves him – but plays it in a jokier way.)

“Alex of Venice” is the feature directorial debut of actor Messina, who told TheWrap that his models for the film’s quiet naturalism were films like “Kramer Vs. Kramer,” Woody Allen‘s “Hannah and Her Sisters” and the work of John Cassavetes.

Also read: Nas at Tribeca: 20 Years of ‘Illmatic,’ Minus Homophobia

“I’ve worked with a handful of first-time directors, and because they have nothing to show you, most of them sit you down and tell you to watch ‘Husbands’ by Cassavetes, or ‘The Last Detail,’ or they’ll tell you, ‘I really want to do this Altman style,'” he said. “They have you listen to a piece of music, or they show you a book, and you really don’t know what the hell you’re going to get.

“And I did the exact same thing. I said to my actors, ‘Look at “Hannah and Her Sisters,” or a Cassavetes film, or David Gordon Green’s “All the Real Girls.” And they all placated me and watched the films and talked about them.”

Messina claims he can’t take credit for Winstead’s performance – “that’s what she did, and we were smart enough to roll the cameras and capture it” – but he also said that he was determined to create the kind of acting enviroment that he finds most satisfying – one that’s not exactly what he’s asked to do on Mindy Kaling’s sitcom “The Mindy Project” and Aaron Sorkin‘s drama “The Newsroom.”

“I’m very proud of both shows, and lucky to have them,” he said. “Sorkin’s show is pretty much like doing a play – there’s no way you can come into that show unprepared, and if you skip an uh or a the you’ll see the script supervisor coming for you. And then you go to ‘Mindy,’ and it’s a comedy. You have to be funny, which is not where I feel at home.

“Both shows are not my planet, but I respect their planets and have learned so much. The movie was a chance to return to my planet.”

If “Alex of Venice” for the most part plays its heartbreak and dysfunction quietly, “Match” is bigger, louder and flashier – but in the end, no less moving. Significantly reworked from Belber’s 2004 Broadway play, it is the story of a young couple who seek out an aging dancer, choreographer and dance teacher for reasons that are not immediately clear.

Patrick Stewart plays the teacher, Matthew Lillard and Carla Gugino the couple – and as you might expect from a property that began its life on the stage, all three actors have showy roles that they attacked with relish during the film’s remarkably short 15-day shooting schedule.

All the actors are strong, but Stewart in particular is a nonstop delight, delivering a spectacularly funny and ultimately moving performance; he chews a lot of scenery in the first half of the movie, but he does so with such style that you can never take your eyes off him. And when things get tougher, quieter and darker, he tones things down so effectively as to break your heart.

The audience at the BMCC theater responded with real enthusiasm, first during the movie and then during a Q&A in which Lillard briefly stole the show from his more celebrated co-star, to Lillard’s own dismay.

Two of the first audience members to ask questions prefaced their queries by praising past Lillard performances – the first raving about the 1998 cult film “SLC Punk,” and the second starting her remarks by saying, “I’m a big ‘Scooby’ fan.”

After the back-to-back mentions of gems from his filmography, Lillard immediately interrupted the questioner. “This is the greatest Q&A ever!” he said, and then grew visibly embarrassed.

Pointed to Stewart, he grinned and yelled to the crowd, “He’s a knight, goddamnit! He gave one of the greatest performances ever in this movie, and if you ask me he should win an Oscar. And to put that performance anywhere near ‘Scooby F—ing Doo’ is horrifying!”

The audience roared with laughter, and Lillard’s body of work went unmentioned during the rest of the Q&A.

Both “Match,” which was produced by David Permut, Matt Ratner and Richard Rosenthal, and “Alex of Venice,” produced by Jamie Patricof’s and Lynette Howell‘s Electric City Entertainment, came to Tribeca looking for distribution. Both seem likely to find it.