The Tribeca Film Festival, which closes its ninth annual run this weekend, was launched by Jane Rosenthal with her husband Craig Hatkoff and creative partner Robert De Niro after the 2001 terrorist attacks as a way to help bring New Yorkers back to lower Manhattan. When not helping to run the festival and the Tribeca Film Center, which she founded with De Niro in 1988, Rosenthal produces movies — including a long string of commercial (“Meet the Parents,” “Analyze This”) and critical successes (“About a Boy,” “Wag the Dog”).

She spoke with Eric Estrin about how to start a film community, her first conversations with Robert De Niro, and their mutual friend, Martin Scorsese. 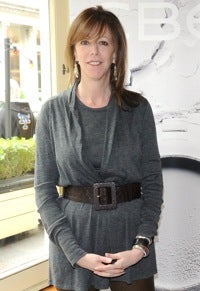 I wanted to be an actress, but my parents wouldn’t put me through school if I majored in acting. So I studied film and television at NYU.

I ended up observing sessions at the Actors Studio – and to do that, you had to work. So I had produced a Norman Wexler workshop at the studio, and then Pete Masterson was around, and he asked me to read a script and asked if I could help him produce it in a workshop.

From that, I ended up producing a play that then landed on Broadway, “The Best Little Whorehouse in Texas.” I produced it at the Actors Studio and then I was the directing assistant to Peter, who directed it both off Broadway and on.

At the same time, I was going to NYU and working part-time at CBS doing all kinds of different things. I was in sports and program practices and doing pre-buy theatricals. Eventually, they offered me a job to move to Los Angeles and be director of development for miniseries and television movies.

I came to CBS for five years, and 70 television movies — we covered every social issue and disease of the week, and “the seduction of…” It was a tremendous education. Then

I went to Universal to do features with Frank Price for a year, and then went to work for Katzenberg and Eisner when they moved over to Disney from Paramount. I was assigned to work on “The Color of Money” with Martin Scorsese; I was his production executive.

Marty didn’t really want to pay much attention to his studio executive, and this is when NYU became very valuable to me. I actually turned to him at one point and said, “Well, I went to NYU film school, and I had Haig Manoogian for a professor,” and he was like, “Really? So did I.” After that we started talking more.

He basically said to me, “What are you doing as a studio executive? You should meet my friend Robert De Niro who’s thinking of starting a company.” And I said, “Sure, I’ll meet with him. “

To be honest, I wasn’t really interested in moving back to New York, and I wasn’t interested in working for an actor. But it was Marty asking me to meet De Niro, and I had gone to NYU film school. They were gods in that world! How could I not take that opportunity?

He was never intimidating; it was just always natural. There’s always a certain chemistry when you first meet people — you either get along or you don’t, and we just did. I mean, we talked for a long time; it wasn’t like it was one conversation.

Still, at the time, this sounded a little far-fetched to pack up and go. At the end of the day, I found myself writing a list of pros, cons and intangibles, and the intangibles were gonna be intangibles my whole life. The pros for moving outweighed the cons.

The biggest thing was that I was in a business where you had to trust your own instincts, and if I couldn’t trust my own instincts, then I shouldn’t be in the business.

I had just turned 30; I had no responsibilities. I had two dogs, but I could move with them. I felt I owed it to myself to take a shot. I finally just said, OK, I have to give this a chance. That was 21 years ago.