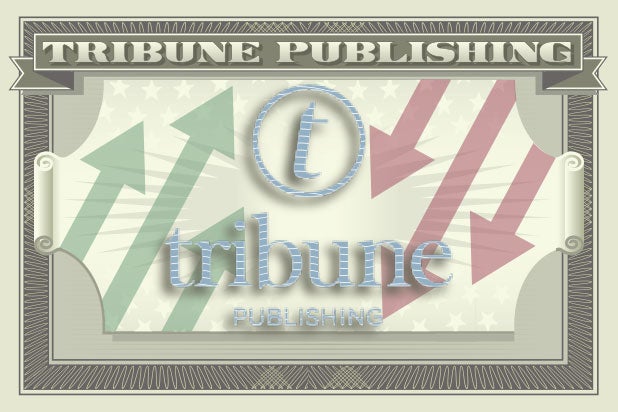 Los Angeles Times owner Tribune Publishing reported a $6.5 million loss in advertising revenue for the first quarter of 2016, compared to a $2.5 million net profit for the same period a year ago.

Revenue was flat for the period ending March 27 at $398.2 million, compared to $398.3 million a year ago. Shortly after earnings were announced, Tribune rejected Gannett Co. offer of $815 million to purchase the company.

Per-share earnings came in at 23 cents, just under analysts’ estimates, after adjusting for elements like employee buyouts at many of its newspapers, which also include the Chicago Tribune.

“Our results for the first quarter were in line with our expectations driven by good momentum in digital and increased circulation revenue offset by a decline in advertising revenue,” Tribune Publishing CEO Justin Dearborn said in a statement.

Dearborn discussed a plan to bankroll seven new foreign bureaus in “entertainment oriented” cities under the banner of the L.A. Times during a call with analysts. He intends to create a digital chronicle of entertainment capitals around the globe to increase the Times’ brand.

It has been a bizarre quarter for Tribune, as Gannett Co. publicly offered $815 million to purchase the company in an unsolicited takeover. Top execs for the two companies have traded insults and Gannett announced Monday its intent to seek “withhold” votes in connection with Tribune’s 2016 Annual Meeting of Stockholders, which is set for June 2.

Oaktree Capital Group LLC, the Tribune’s second-largest shareholder, reportedly supports the sale, but not for that offered price, as the investment firm thinks it can fetch more.

“Gannett has no path to control for Tribune Publishing and their tactics clearly demonstrate a desperate and opportunistic attempt to steal the company,” Tribune said in a statement on Monday.

Tribune also parted ways with former CEO Jack Griffin earlier this quarter as part of a massive shakeup by Ferro.

On Wednesday, Dearborn defended the company’s strategy in announcing the quarterly results. “We are at the very early stages of executing our clear plan to transform Tribune Publishing by increasing monetization of our important brands, capitalizing on the global potential of the LA Times, and significantly accelerating our conversion of content to revenue through an enhanced digital strategy,” he said.

Terry Jimenez, CFO of Tribune Publishing added, “We have strengthened our financial position in the first quarter by expanding margins, delivering solid growth in Adjusted EBITDA and ended the quarter with a cash balance of $96 million.”