Newspapers may be dying, but the web isn’t lacking for journalists trying to figure out how to replace them.

The latest, True/Slant is the brainchild of media veteran Lewis Dvorkin, a former editor at Forbes, Newsweek, the New York Times and, until April 2008, senior vice president of AOL News and Sports. At AOL, he was also instrumental in the founding of that online bane of most journalists, TMZ. 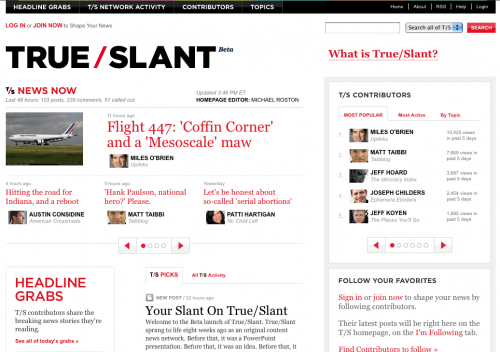 But Dvorkin said he’s serious about this one. He calls True/Slant, which launched its beta version Monday, an "original content news network" giving "entrepreneurial journalists” a place to create a digital brand for themselves by writing blog posts, reporting on stories or providing commentary. They also post headlines, links and videos from other sites that they want to share with the community.

“Our journalists are credible, knowledgeable, experienced media folks,” Dvorkin told TheWrap. “They could be journalists, bloggers, an author, an academic, an expert, any individual with strong knowledge and experience in a specific news topic.” 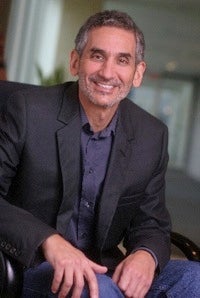 “Every user has their own account page and own activity page,” Dvorkin (pictured at right) said. “The more account pages that we have, the ability of users to start and interact with other users and see what they are doing creates a wonderful sphere of interactivity.”

Unlike most sites, which place comments at the bottom of every story, comments will be placed at the top right of the page, and when the conversation becomes active enough, they’ll will be posted on the homepage. Having contributors directly engaging with users is one way in which Dvorkin feels he has begun something unique.

"Whether we want to or not, as journalists we’ll all be bloggers or are already bloggers in some capacity," said True/Slant contributor and former Newsweek writer Michael Hastings. "And people love commenting. It’s a commenter’s paradise."

The idea for the True/Slant had been germinating with Dvorkin for some time. He said he first mentioned it several years ago to his former boss at Forbes, Tim Forbes, then to another former boss, Jon Miller, previously the CEO of AOL and now chief digital officer at News Corp. Dvorkin introduced Forbes and Miller, then at Fuse Capital, who split a $3 million contribution to start the site in June 2008.

The site launched its alpha version in April 2009 with 65 contributors, collecting 155,000 unique visitors in three weeks, Dvorkin said. During May, that number jumped to 266,000, and with the new version launching, the site now boasts 100 contributors and is run by a full-time staff of six, he said.

The site has sold out its advertising through June, Chief Marketing Officer David Cautin told TheWrap. Ads are supposedly on two pages, those of Miles O’Brien and Austin Considine, but The Wrap did not find ads there.

But he and Dvorkin make it clear that traditional ads are not the only expected revenue stream. In fact, True/Slant is preparing a new business model called “Ad Slants,” which will provide advertisers their own pages, profiles and posts, similar in look and feel to the profile pages of contributors.

“There’s an ongoing back story on the internet about how marketers have been craving mediums that express notions beyond the 300-by-250 ad, and we do that by providing them with page within a news network and positioning within the industries,” Dvorkin said.

While this potentially blurs the line between editorial and advertising, Dvorkin said the site will distinguish between Ad Slants and consumer or contributor postings. The top of every Ad Slant will have a logo indicating that it is advertorial, and the pages will feature commercial logos and distinct corporate colors.

Contributors also gain from the new modes of advertisement. While some will be paid what Cautin referred to as a "stipend" (and he declined to define what that meant), "those that generate the biggest audience will get the highest compensation, whether this stems from a revenue share from the ads sold on their pages, or from equity in the company," Cautin said.

"The payment options are mutually exclusive," Cautin said regarding individual payment by e-mail. " We work with each contributor to find a customized compensation arrangement considering the nature of the content, the expectations for audience and the contributor’s tolerance for risk."

Dvorkin added: "One of the great things I have in this project is to combine the values and standards of traditional media with the dynamics of the web. We will be fully transparent about it.”