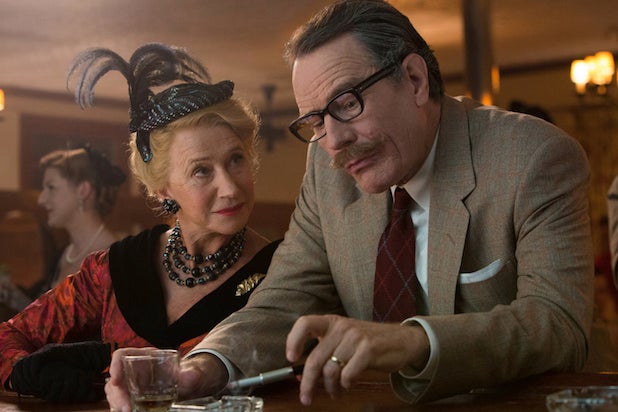 Jay Roach made something of a Freudian slip when he introduced his enlightening and entertaining film “Trumbo” at the Toronto International Film Festival on Saturday night. Thanking the members of blacklisted screenwriter Dalton Trumbo‘s family who were in attendance, he said, “We’re humored to tell your family’s story.”

He obviously meant to say he was honored — but in a way, humored works for “Trumbo.” Roach could have taken a heavy tone in telling the story of a shameful period in Hollywood history in which lives and careers were destroyed.

But he didn’t. For much of its running time, “Trumbo” could almost qualify as a comedy, with Bryan Cranston as Trumbo’s nonstop wisecracks. He shares screen time with priceless turns by John Goodman as a producer of schlock, Louis C.K. as a left-wing radical screenwriter and Helen Mirren as the grand dame of gossip, Hedda Hopper.

Also Read: Toronto: 'The Martian' Is a Great Popcorn Movie, and a Lot More

Roach was initially best-known for comedies like the “Austin Powers” movies and “Meet the Parents,” though in recent years he’s also directed the true-life HBO political films “Game Change” and “Recount.” Those films had a light touch, and so does “Trumbo,” which opens with a shot of the Oscar-winning screenwriter working on a script in his favorite location: the bathtub.

Dalton Trumbo, whose remarkable body of work included “Roman Holiday,” “Kitty Foyle” and “Spartacus,” was a man who spoke in a declamatory style — “like everything you say is going to be chiseled in stone,” as one character complains.

“He was a very theatrical man,” said Cranston in the post-screening Q&A, “and I was worried about going too big.”

But Roach takes that theatrical style, mixes it with the look and feel of movies from Trumbo’s era (including politically-themed dramas like Elia Kazan’s “A Face in the Crowd,” a favorite of Roach’s) and whips up a playful, stylized, slightly melodramatic tone.

At first, it takes a while to relax into the feel and rhythm of “Trumbo,” whose jokiness occasionally threatens to overwhelm a story of real import. But the film grows richer and more nuanced as it goes on and as the personal and professional toll taken by the blacklist mounts.

Cranston, meanwhile, is a force of nature in a title role that gives him a chance to chew the scenery with gusto. But he also creates an indelible portrait of a man who talked like a radical but lived like a rich man (in the words of another character), and who was willing to risk much, but not lose it all.

Academy and guild voters in Hollywood love movies about Hollywood, which could give “Trumbo” a boost come awards season. The film is rife with stars and moguls, most notably Michael Stuhlbarg as Edward G. Robinson, Christian Berkel as the imperious director Otto Preminger, David James Elliott as John Wayne and a convincing Dean O’Gorman as Kirk Douglas, who helped end the blacklist by putting Trumbo’s name on “Spartacus.”

It’s also possible the comic elements in “Trumbo” will prove too lighthearted for voters who usually go for more portentous fare, but let’s face it: It’s foolish to underestimate Hollywood’s fascination with itself.