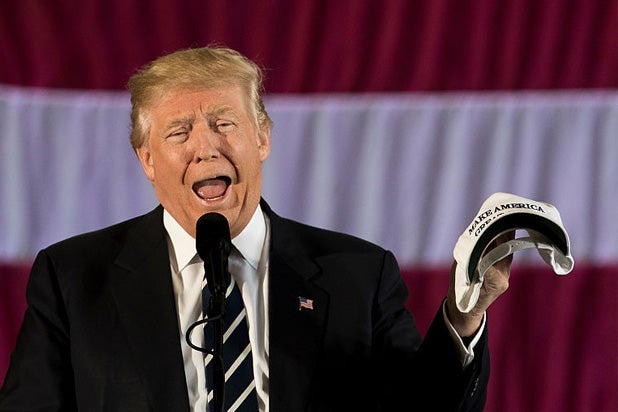 If advisors were hoping Donald Trump would tone down his rhetoric about North Korean dictator Kim Jong-Un, they were likely disappointed tonight by the President’s appearance at a rally in Alabama Friday night.

During his speech at a rally for GOP Senate candidate Luther Strange, Trump repeated his “Rocket Man” jab at Kim, and blamed former Democratic presidents Barack Obama and Bill Clinton for rising tensions between the U.S. and North Korea.

“Rocket Man should’ve been handled a long time ago by Clinton,” Trump said, adding that “I’m not gonna mention the Republicans,” apparently letting George W. Bush off the hook.

Trump reiterated to the crowd that “You are protected,” but he egged on Kim, boasting that the North Korean dictator is watching his comments very closely.

“I want to tell you something, and I’m sure he’s listening, because he’s watching every word and I guarantee you one thing, he’s watching us like he never watched anybody before. That I can tell you,” Trump said.

By contrast, Trump’s comments on Senator John McCain were restrained. He expressed disappointment and surprise in McCain and said McCain’s previous vote was “horrible” for the Republican Party, but refrained from getting personal in the way he did with Kim.

McCain dealt a blow to the chances of Obamacare repeal passing earlier today when he announced he would be voting against the health care bill proposed by senators Lindsey Graham and Bill Cassidy.

“I cannot in good conscience vote for the Graham-Cassidy proposal. I believe we could do better working together, Republicans and Democrats, and have not yet really tried,” McCain wrote in a statement.

McCain is now one of two Republican “no” votes on the the bill, along with Sen. Rand Paul, R-Ky. Only one more Republican senator needs to vote no in order to kill the bill, though right now the legislation can still pass with 50 votes and Vice President Mike Pence to break the tie.