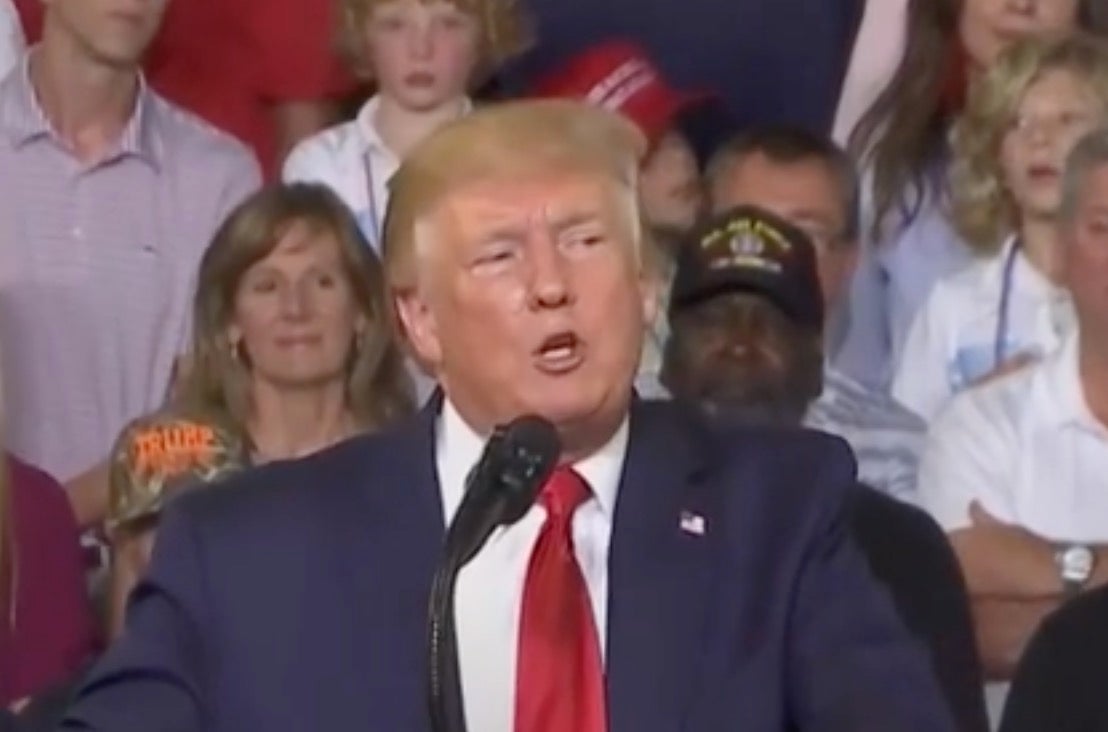 President Donald Trump ripped the media in a series of tweets Friday morning, criticizing coverage of a Wednesday rally in North Carolina where his supporters chanted “send her back” in reference to Somali-born Rep. Ilhan Omar.

“It is amazing how the Fake News Media became ‘crazed’ over the chant ‘send her back’ by a packed Arena (a record) crowd in the Great State of North Carolina, but is totally calm & accepting of the most vile and disgusting statements made by the three Radical Left Congresswomen…,” Trump tweeted.

“….Mainstream Media, which has lost all credibility, has either officially or unofficially become a part of the Radical Left Democrat Party. It is a sick partnership, so pathetic to watch! They even covered a tiny staged crowd as they greeted Foul Mouthed Omar in Minnesota, a…,” he continued.

“….State which I will win in #2020 because they can’t stand her and her hatred of our Country, and they appreciate all that I have done for them (opening up mining and MUCH more) which has led to the best employment & economic year in Minnesota’s long and beautiful history!,” the thread concluded.

Wednesday’s rally came four days after Trump initially tweeted that Reps. Omar, Rashida Tlaib, Ayanna Pressley and Alexandria Ocasio-Cortez should “go back” to the countries of their ethnic origins. On Thursday, Trump claimed he was “not happy” with the chant and started speaking quickly to stop it.

Reporters quickly countered what Trump said, with the New York Times reporting that “In fact, as the crowd roared “send her back,” Mr. Trump paused and looked around silently for more than 10 seconds as the scene unfolded in front of him, doing nothing to halt the chorus.”

“The chant was loud, it was clear, and it lasted twelve seconds before he resumed his remarks,” CNN’s Betsy Klein tweeted.

Trump also attacked New York Times columnist Thomas Friedman, who earlier in the week wrote that Trump was a “racist, divisive, climate-change-denying, woman-abusing jerk.” In response, Trump called Friedman “a weak and pathetic sort of guy”  and “Thomas ‘The Chin’ Friedman.” Trump also said that the two spoke on the phone politely before Friedman’s piece was published.

“He could not have been nicer or more respectful to your favorite President, me. Really Nasty to me in his average I.Q. Columns, kissed my a.. on the call. Phony!,” Trump said.