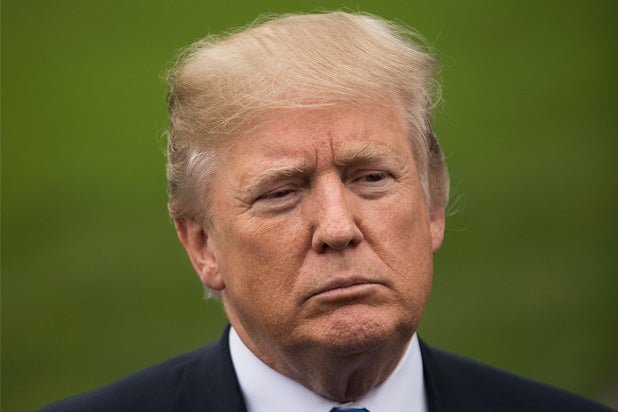 President Donald Trump took to Twitter on Monday for a full broadside against the media, taking a shot at the ratings for MSNBC’s “Morning Joe” and proposing a “fake news trophy” to America’s “most dishonest” network.

“We should have a contest as to which of the Networks, plus CNN and not including Fox, is the most dishonest, corrupt and/or distorted in its political coverage of your favorite President (me),” Trump tweeted.

“They are all bad. Winner to receive the FAKE NEWS TROPHY!” he continued.

We should have a contest as to which of the Networks, plus CNN and not including Fox, is the most dishonest, corrupt and/or distorted in its political coverage of your favorite President (me). They are all bad. Winner to receive the FAKE NEWS TROPHY!

In the next breath, he commented on a tweet from his social media guru Dan Scavino Jr, which promoted a Breitbart post about how “Morning Joe” tried to pass off a pre-recorded show last Friday as live.

The observation was first pointed out by the Washington Post’s Paul Farhi.

“The good news is that their ratings are terrible, nobody cares!” Trump wrote.

The good news is that their ratings are terrible, nobody cares! https://t.co/I7h4Ryin3h

The tweets were par for the course for a president who has made media criticism one of the most predictable parts of his administration.

Trump’s attack on CNN comes as his Justice Department seeks to block the merger between AT&T and CNN’s parent company Time Warner. While the DOJ is citing antitrust issues, many in the media have speculated that the move is punitive and being directed by Trump — who promised as a candidate to block the merger if elected.

Trump also did a bit of policy, telling American’s that the GOP’s effort at tax reform was “coming along very well.”

The Tax Cut Bill is coming along very well, great support. With just a few changes, some mathematical, the middle class and job producers can get even more in actual dollars and savings and the pass through provision becomes simpler and really works well!