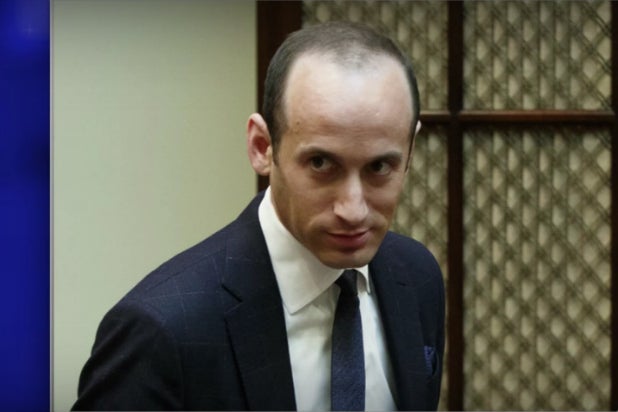 A lengthy profile on White House advisor Stephen Miller in Monday’s New York Times shows he was a complete troll at his liberal California high school, where he joined a girl’s race uninvited just to show that he was faster.

“He jumped, uninvited, into the final stretch of a girls’ track meet, apparently intent on proving his athletic supremacy over the opposite sex,” wrote author Matt Flegenheimer.

When pressed by the paper, the White House pointedly refused to decline the claim but rather told the Times that the girl’s team in question was from a different school. Another incident described by the Times, a patriotic “semi-striptease” also went unchallenged by the White House.

After allies Steve Bannon and Sebastian Gorka were fired, Miller has become one of the last members of President Trump’s nationalist flank still working at 1600 Pennsylvania Avenue.

NYT: Mr. Miller once jumped into the final stretch of a women’s track meet, apparently intent on proving his athletic supremacy over the opposite sex.

White House: Yeah but the team was from another school. #SantaMonicaHSFirsthttps://t.co/b3iZ8ECrFa pic.twitter.com/IXp3SFPVIH

White House confirmed Stephen Miller once jumped into a girls’ track meet to prove men are stronger than women. https://t.co/Zosu192ZFy

Stephen Miller, a White House adviser with direct access to the president, is a very normal person. https://t.co/hlwfO1FF98 pic.twitter.com/mK8Ftd5SQ2

If Stephen Miller once jumped, uninvited into a track meet you were participating in, I want to hear about it. [email protected] pic.twitter.com/yrBZ9NcrQ9