There is an entire cottage industry within media dedicated to disseminating Tucker Carlson’s nightly Fox News musings to presumably liberal audiences who may not be tuning in to hear what the leading conservative voice is telling his large following. But recent data from Nielsen MRI Fusion suggests those nightly dispatches may not be necessary: In October, the most recent month for which data is available, Carlson’s 9 p.m. ET program was the top cable news show among Democrats in the advertiser-coveted age range of 25-54.

The Nielsen MRI Fusion numbers reveal that in October, Fox News unsurprisingly got the majority of the audience of self-proclaimed Republicans, with 69% of them overall tuning into total-day programming and 73% of them in the demo tuning into primetime programming. CNN and MSNBC split the remaining conservatives with totals in the low double-digit percentages. Fox News also commanded the largest number of independents in the key news demo during primetime and total-day hours: 55% of those 25-54 watched the network in primetime, compared to CNN’s 23% and MSNBC’s 22%. During total-day hours, 58% of independents in the demo watch Fox News, 18% chose MSNBC and 25% selected CNN.

More surprising are the stats about Carlson and Fox News’ pull with self-proclaimed Democrats. Of those demo-aged viewers surveyed who identified as Democrats, 39% chose Fox News, 31% chose MSNBC and 30% chose CNN for programming from 8 p.m. ET to 11 p.m. ET. In total-day viewership, Fox News grabbed 42% of Democrats aged 25-54, CNN nabbed 33% and MSNBC got 25%. 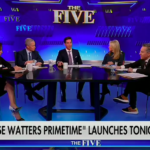 These numbers only account for October but reveal that Fox News’ and Carlson’s sizable audiences are not that easy to define. Consider Carlson’s ratings that month. In October, Carlson’s show was the top-rated program in the demo across all of cable news and was the second highest-rated show overall, coming in only behind Fox News’ late-afternoon panel show “The Five.” In total average viewers, he netted 3.081 million viewers and in the demo, he secured 483,000. For the entire year of 2021, “Tucker Carlson Tonight” was the highest-rated program in cable news overall, bringing in an average of 3.214 million total viewers with 535,000 in the demo.