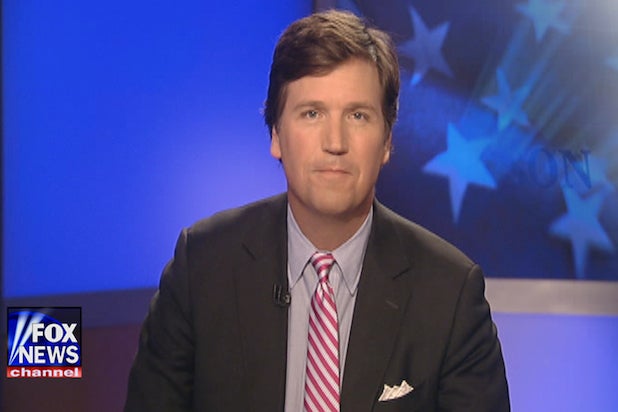 Someone made Fox News Channel’s newest star, Tucker Carlson, trim his signature shaggy locks before “Tucker Carlson Tonight” premiered one month ago — but early returns prove the decision was a win for everyone involved.

Carlson told TheWrap he doesn’t know who the “prime mover behind that was” but the order came from the top of cable news giant.

“All I know is that word came down that it must be shorn,” Carlson said of his hair. “But that’s a small price to pay.”

However, Carlson joked that he’ll go “full Rasta” if his show maintains it’s early ratings success but eventually admitted that he understands the cleaned-up hair-do is part of his “new life as a legitimate person.”

The truth is that Carlson could probably get away with anything he wants if keeps delivering strong audiences for Fox News co-presidents Jack Abernethy and Bill Shine.

Carlson took over the 7 p.m. ET timeslot formerly occupied by Greta Van Susteren back on Nov. 14 and hasn’t slowed down. The first week of “Tucker Carlson Tonight” was the third highest-rated week of the year for Fox News during the 7 p.m. timeslot, behind only election week and the Republican National Convention coverage.

In the first four weeks of the show, “Tucker Carlson Tonight” averaged 2.9 million viewers and 537,000 in the key demo of adults age 25-54, topping CNN’s “Erin Burnett Outfront” and MSNBC’s “Hardball with Chris Matthews” combined in both categories.

“I just want to make a show that I would watch. I’m mostly a news reader, so I always think when I’m reading the stories, ‘I wish I could talk to the person in the story,'” Carlson said. “Less analysis and more interviews with people who are in the news, maybe who aren’t on television a lot but are directly connected to the story.”

Carlson prefers to have “participants” from the news on his program, and the plan has paid off. He’s had a variety of guests over the first four weeks of the show, including New York Times public editor Liz Spayd, Newsweek’s Matt Cooper, Martin Shkreli and even someone who burnt an American flag.

Many of these guests wouldn’t typically appear on Fox News, but are willing to debate Carlson when he calls on them. Carlson said the reason is a combination of his relationships he’s built over the years and the inviting format of the show that results in left-leaning pundits to appear on his show.

“I know a lot of liberals. This is my 25th year in the media. I’ve lived in a very liberal world my whole life. I like, by the way, a lot of the people in it,” Carlson said. “I know a lot of people … I like to think that we give them a chance to talk. There is no point in having someone on if you don’t let them say what they think.”

Also Read: Why Bill O'Reilly Is Having a Better Month Than You

The conservative Carlson said his own opinion has even changed on certain topics when a guest made a particularly good argument.

“I’m winnable, for sure. My views are not ossified at all. They change all the time,” Carlson said. “Part of it is sincere curiosity.”

If Carlson can learn to agree with liberals and deliver strong ratings in the process, perhaps Fox News execs will learn to love his shaggy hairstyle.