Whether you were Team Backstreet Boys or Team *NSYNC in your youth, it doesn’t matter — we are all 4*Townies now. Disney’s first ever boy band has arrived and, according to its members, singing together was truly magic.

“Turning Red,” now streaming on Disney+, introduces 4*Town — cleverly playing on the asterisk in *NSYNC, and the name of lesser known boy band O-Town — and, like any tweens would be, Mei and her friends are obsessed with the group.

With songs written by Billie Eilish and Finneas, the group is made up of Finneas, Jordan Fisher, Josh Levi, Grayson Villanueva and Topher Ngo. Sadly, there was no official boy band boot camp for 4*Town, though Ngo, who lends his bass vocals to the group, would’ve loved if there was.

“We kind of met in the studio for the first time and it was magic being able to kind of find our sound and blend together in the moment,” he explained to TheWrap. 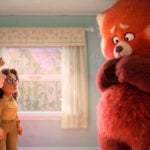 Grayson Villanueva readily agreed to that, and uses the same descriptor: magic. You can watch TheWrap’s full interview with Fisher, Levi, Ngo, and Villanueva in the video above.

“It was definitely a process,” he added. “But by the time that we started to get to know how we all sound together, it started really feeling like magic.”

“I mean, each of us have such like uniquely different voices and they all bring something so different to the table,” Ngo added. “And what’s so cool about these tracks is they’re written so well, with really tight harmonies that complement each of our ranges. So I got to sit in bass land all day. The entire session I was chilling in the basement, I was so happy. And my boy Grayson, and all y’all were like up in the stratosphere, like in the sweet spot and it’s so amazing to listen to. And so well written out.”

For Ngo and Villanueva, prepping for 4*Town came from performing in various acapella groups. For Jordan Fisher and Josh Levi, it was experience in the music industry at large. Levi has actually known Billie Eilish for years.

“Yeah, Billie and Finneas had me in mind and thought of me for this, which was so dope,” Levi revealed. “That came out of nowhere, I wasn’t expecting it. I’ve known Billie for a minute. I hadn’t seen her in like, a year, obviously COVID and all of that. But it was really dope to reconnect and for something as special as Pixar. And for them to have me in mind, it’s such a blessing and honor. It was so exciting.”

Of course, Jordan Fisher is no stranger to Disney. He appeared on the “Moana” soundtrack, singing a pop version of “You’re Welcome” with Lin-Manuel Miranda, and most recently lent his voice to the Disney+ series “Star Wars: Visions.” He even got married in Disney World. (Next up, he’d really like to take a Disney cruise). 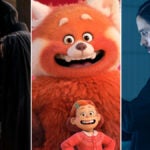 Also Read:
Sony, Disney and Warner Bros. Halt Release of ‘The Batman’ and Other Films in Russia

But, he’s never been in a boy band. For him, working with so many other voices was exciting.

“I mean like, as a writer, and as a creator, my favorite way to build is with other people,” Fisher said. “It’s just, it’s more fun. I mean, sometimes there’s those personal pieces where I’m at the piano, with a recorder and like, that’s where it’s gonna start. But, you know, other than that, a collaborative effort to me just like bears more fruit on the other end of it most of the time.”

He continued, “And to be able to do that, not only with Billie and with Finneas, but with these other fine gentlemen here, it was really just a wonderful, wonderful experience. I mean, we had a great time. And there were moments of really challenging stuff too that we had to, you know, really dig deep and all really be professionals and make it work. And then we did in a beautiful way and I’m so proud of this film, proud of these guys, and I’m excited for everybody to see it.”

“Turning Red” is now available to stream on Disney+.