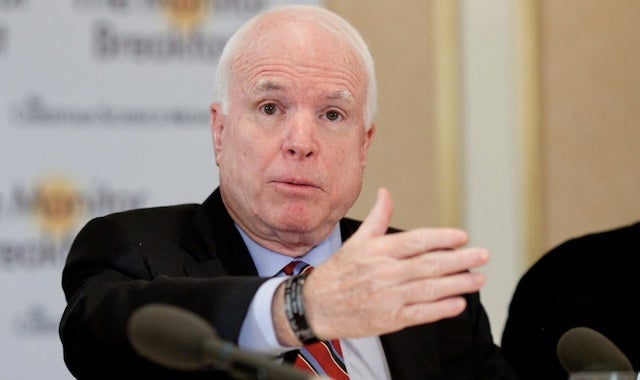 Sen. John McCain will fundamentally change television if his latest legislation succeeds: It would allow consumers to pay for only the channels they want to watch, instead of being forced to plunk down lots of cash for a full cable package of negligible offerings.

The Arizona Republican's bill faces lots of hurdles and will likely be subjected to fierce opposition from the cable industry, so passage is far from assured. Cable companies like the current system, because it allows them to force subscribers to pay for less popular channels if they want to keep watching ESPN.

Cable networks want to keep the status quo in place so they can continue bundling their top channels like AMC or MTV with their less desirable ones.

Before the mudslinging gets fierce, here's a look at four things that the legislation, dubbed the Television Consumer Freedom Act of 2013, would accomplish — besides potentially taking a big chunk out of Comcast's profits.

1. Let You Stop Paying for the Hallmark Channel

…or Ovation or WE TV or VH1 or Lifetime or OWN or,  depending on your political leanings, MSNBC or Fox News. The list goes on and on.

Buying channels on an a la carte basis would let users select only those channels that carry programming they actually want — primarily sports, "Walking Dead" and "Duck Dynasty."

There are downsides, including creative ones. The television renaissance taking place around us is viable in part because media companies are making so much money from a fractured landscape. The 3 million viewers who tune in each week "Mad Men"s' meticulously crafted depiction of the 1960s may have to get used to more bargain-barrel production values when AMC's parent company is forced to sell its channels individually. After all, the money the company earns from bundling WE TV and Sundance helps make Don Draper's lifestyle possible.

2. Keep Broadcasters from Migrating to Cable

Broadcasters are threatening to abandon the public airwaves and pull up stakes for cable. The cause of their sudden migratory fever is Aereo. The internet streams over-the-air television from the likes of CBS and ABC for a low monthly price, prompting a heated legal challenge.

McCain's bill will strip networks of their broadcast licenses if they move their entire businesses — or even major live events like the Super Bowl — to cable.

If McCain's legislation gets enacted, it could save users a nice chunk of change by arresting the alarming increases in monthly cable bills. Right now, customers pay an average of $86 a month, but if cable companies continue to raise prices at a rate of 6 percent a year, the cost could skyrocket to beyond $200 a month by 2020, according to the consumer market researcher NPD Group.

A pay-as-you-go model for cable could help subscribers from having to choose between junior's college tuition and "Storage Wars."

After a divisive presidential campaign and a veer into "complete the danged fence" territory, McCain lost his iconoclastic stripes in recent years. He's remained an ornery regular at the "Meet the Press" table, harping on President Obama's deficiencies,  while maintaining a frosty relationship with the media elites he once joked were his base. He's just seemed so angry.

But taking on the cable industry seems to have unlocked McCain's happy warrior side.

While introducing the legislation on the Senate floor, McCain had a message for the industry that should bring Democrats and Republicans together.

"Today we are putting up a stop sign," he declared.

Expect press coverage so glowing it could even melt the hostility between McCain and "The Daily Show"s' Jon Stewart. The maverick is back.