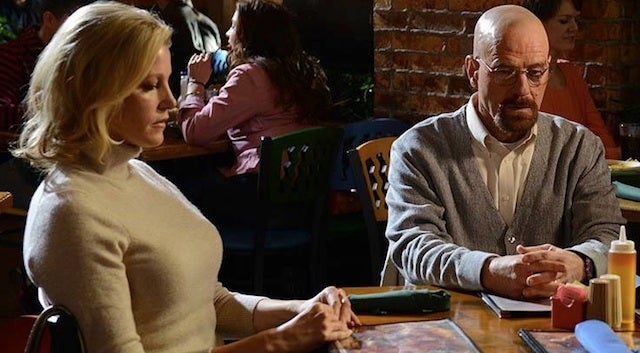 The Mexican restaurant that factored into last Sunday’s “Breaking Bad,” reports a surge in orders for tableside guacamole since the appetizer was prominently featured on the AMC drama.

Garduno’s’ dip was a recurring punchline during an excruciatingly tense exchange that found meth dealer Walter White (Bryan Cranston) and his wife (Anna Gunn) involved in a tense standoff with his brother-in-law, a DEA agent named Hank Schrader (Dean Norris). As tempers flared, a Garduno’s waiter keeps butting in at inopportune times to talk up the restaurant’s guacamole.

His sales pitch may not have worked on the Whites, but it has on customers.

Thirty percent of guests usually order guacamole, but Corporate General Manager Warren Gaustad told TheWrap that the number has surged to 35 percent — with many visitors specifically referencing “Breaking Bad” as the reason for their selection.

There’s also been an influx of “Breaking Bad” tourists looking to see where the episode was shot.

“It’s been pretty funny,” Gaustad said. “We’ve had a lot of people coming in to take pictures and wanting to sit at the table where the characters sat.”

And don’t worry — there are no hard feelings about having the restaurant be a source of jokes, even if Gaustad argues his waiters aren’t usually overly solicitous.

“The server was a little cheesy, but I laughed when I watched it,” Gaustad said.

The scene was shot over a long January day at Garduno’s’ Winrock Mall location in Albuquerque, N.M., with the restaurant’s staff playing busboys and servers (but not the guacamole-pushing waiter, who was a professional actor). In addition to Cranston, Gunn, Norris and Betsy Brandt (who plays Marie Schrader), filming brought several celebrity audience members.

Gaustad said Aaron Paul, who play’s White’s partner Jesse Pinkman, stopped by for an hour even though he wasn’t in the scene and talked to the restaurant’s staff. There was also a “Malcolm in the Middle” reunion of sorts, as Jane Kaczmarek, the actress who played Cranston’s wife on the Fox sitcom, watched filming from the restaurant’s bar with her son.

The brush with celebrity was no big deal for Albuquerque residents, who are accustomed to seeing Cranston and crew, given that the show has been set in the city for all of its five critically acclaimed seasons.

“This is a local show,” Gaustad said. “We always expect ‘Breaking Bad’ to be shooting somewhere around the city.”

As good as that guacamole is, Gaustad said his favorite item is the Red Carne Adovada — pork marinated in red chili sauce — and it could be the perfect meal the next time the Whites and Schraders decide to break bread.