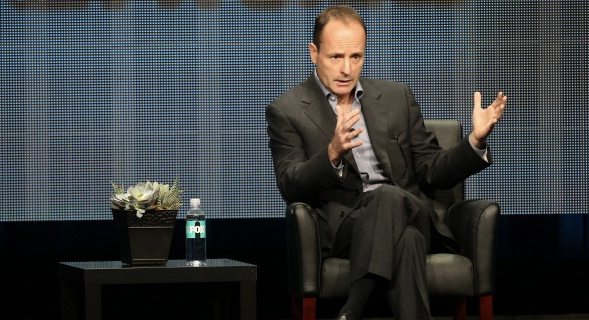 FX CEO John Landgraf likens his networks expansion to FXX to a boxer moving up in weight class.

At a Television Critics Association panel Friday, he said the network is expanding partly because it needs more space for its shows. He also talked about the creative freedom FX gives shows like "Louie" and about competing with Netflix, a rival that doesn't release ratings data.

In addition to a growing roster of scripted shows, The FX networks now have agreements to air about two-thirds of all recent North American blockbusters — "more than twice as many films as all of our competitors combined in terms of films over $100 million."

"You can punch above your weight for a couple of rounds, but if you put a middleweight in the ring ith a heavyweight and it goes 10 rounds, I think you can usually guess who's going to win that fight," Landgraf said. "So we just decided, look, we've been punching above our weight for a long time… we're going to have to try to go into heavyweight if we want to really be a top, top brand in what is sure to be an incredibly competitive future."

The pugnacious metaphor is typical of a network known for a DIY approach and a slightly male slant. The new FXX will target a slightly younger audience, and will launch in September. "Always Sunny in Philadelphia" will anchor the new network.

"Louis C.K. had some writer's block before he wrote the third season and he put a note up on his desk that said 'This show can be anything,'" Langraf said. "And I think part of why 'Louie' is in my opinion is the best comedy on television right now is he threw out the form and he's just writing from the heart."

But that he also said the streaming service deserves credit for the shows it's creating. He noted its success in earning an Outstanding Drama Series nomination for "House of Cards."