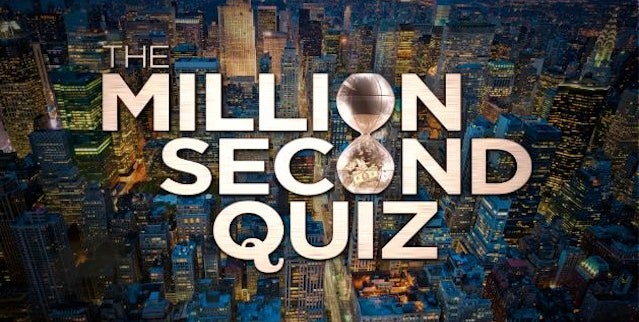 Primetime has a lot of problems: It’s losing viewers to DVR viewing, cable and the internet, and the viewers who remain keep fast-forwarding through commercials.

So NBC is trying to address all those threats at once. The network’s around-the-clock "Million Second Quiz," which just received a Sept. 9 premiere date, gives viewers incentives to watch TV in real time all the time. It even pays them, in a way, to sit through ads.

There’s no telling if the 24/7 quiz show will succeed. But you can bet that you’ll see more experiments like it as broadcasters try, desperately, to get viewers back to watching primetime, in primetime.

At upfront presentations in last month, the broadcast networks unveiled a slew of new shows they hope will slow a viewer exodus from primetime. The question is whether any of them will.

In the 2012-13 season, ABC, CBS, Fox and NBC were all down in they key 18-49 demographic. All were also down in total viewers except CBS, which was up slightly. Among the hardest sliding shows is Fox’s onetime ratings juggernaut, "American Idol."

But there were bright spots. NBC’s "Sunday Night Football" is the top-rated show on television, and its pregame shows are thriving as well. Fox’s postgame show, "The OT," is also scoring great ratings. And while singing shows are mostly down, they do better than most scripted series.

What do football and sing-offs have in common? They center on shared national competitions and take place in real time.

"Million Second Quiz" is trying to do the same.

Like CBS’s long-running "Big Brother," it will feature participants living together, surrounded by cameras, in an hourglass-shaped structure in the heart of Manhattan. Viewers will be able to watch them across several formats around the clock during the show's 12-day (or million-second) run. Similarly, "Big Brother" fans have, in the past, been able to tune into Showtime to see what the contestants do after dark.

While the quiz will never pause, the most heated moments will come in primetime, when up-and-coming contestants vie to replace the top competitors in the hourglass.

If you like shouting "Jeopardy" answers at the screen, you might like "Million Second Quiz" even more: It invites you to play along online. And you might even want to watch the commercials, because the show will give prizes to those who correctly answer questions about its advertisers. You may be challenged, for example, to answer some trivia about Ford Motor Co. during an ad for Ford — and be rewarded with discounts on a car or truck.

“If in answering that question … I was able to win a $1,000 cash back on a Ford summer clearance sale, I would call that a win-win,” Paul Telegdy, NBC’s president of alternative and late night programming, told TheWrap. There’s another cash incentive, as well: The show will give a staggering $10 million to its winner.

But if the stakes couldn’t be higher for the contestants, the same holds true for the networks. Cable is making big gains on broadcasters, with AMC’s "The Walking Dead" becoming the first cable show in history to become TV’s top-rated drama of the season. And networks are now locked in litigation with both Dish and Aereo to try to stop technologies that make it easier for viewers to dodge commercials.

Netflix, meanwhile, has started to offer top-notch original streaming programming, including the Kevin Spacey drama "House of Cards" and new episodes of "Arrested Development." Subscribers can watch them ad-free, whenever they want.

All the options mean NBC’s days of “must-see TV” are long gone. After briefly leading in the key demo in the fall, the network is now third in ratings and fourth in total viewers. (CBS is first in both.) The network is facing a problem that besets all of network television: Aside from football, there’s nothing on TV that can hook almost everyone in a family, much less an office. Why linger around the water cooler talking about some show last night when you can find your niche on Twitter?

Telegdy said "Million Second Quiz" recognizes several realities: Live shows are one of the best ways to get viewers to tune in, and many of those viewers are watching a second screen along with their TVs.

“Typically shows which are live have a higher percentage of live viewership than DVR viewership, for obvious reasons,” Telegdy said. “More people are holding a smartphone than are holding a remote control, which is part of the world we live in now. Imagine your smartphone is populated with a play-along-at-home experience that will also run during commercial breaks.”

Whether "Million Second Quiz" thrives, it will be one of many shows trying to take us back to a simpler time — one when people watched shows and even ads when they actually aired.