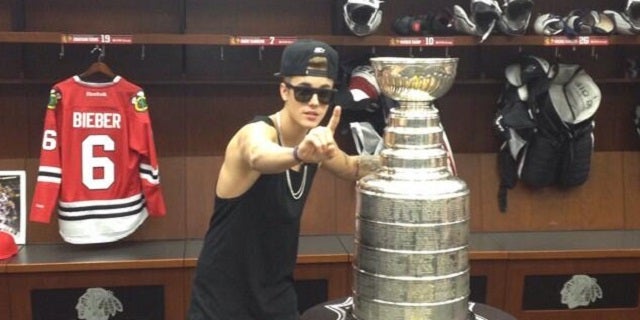 Justin Bieber's Wednesday morning is off to a dynamic start.

Now the increasingly plagued "Boyfriend" singer has enraged fans of hockey and common decency alike, thanks to a video and photo that exploded onto the internet on Wednesday.

First, hockey fans are also expressing their rage at a picture of the singer posing with the Stanley Cup, which was tweeted by the Chicago Blackhawks' executive director of marketing and fan development Peter Hansen. (Bieber performed a concert in Chicago on Tuesday night.)

Then TMZ did its part to thrust Bieber further into the national consciousness with a video clip appearing to depict the singer urinating into a mop bucket in a restaurant before insulting former President Bill Clinton.

In the clip — which according to TMZ was filmed earlier this year in New York — Bieber appears with his back to the camera as he stands before a mop bucket while his companions crow about his antics.

"Quick little piss break, you know," an off-camera voice is heard to say. "Quickest restroom we could get to."

The voice goes on to tell an onlooker that he's witnessing a momentous occasion.

"That's the coolest spot to piss. You know, you'll forever remember that," the voice says. "You're not going to remember him pissin' in the restroom. Everybody does that."

Hmm; there must be a "carry a tune in a bucket" joke in there somewhere…

As Bieber finishes up his business and makes his way up a flight of stairs, he emits some more liquid, spraying a photo of Bill Clinton with what appears to be cleaning fluid while declaring, "F— Bill Clinton!"

Apparently, he's not as fond of Clinton as he is of Nelson Mandela.

As for the Stanley Cup photo, where the Blackhawks' Hansen saw a quick publicity opportunity, hockey fans saw sacrilege and took to Twitter to register their rage.

Maybe they should just be happy he didn't pee in it. As far as we know, anyway.