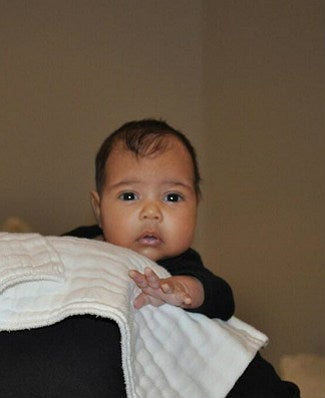 The long national wait is finally over: We have our first look at Kim Kardashian and Kanye West’s daughter, the intriguingly named North West.

Papa West revealed the photo in a way entirely in keeping with the Kardashian family’s M.O. — by helping to promote the family empire. Baby North was presented on the final episode of the test-run of “Kris,” the talk show hosted by the baby’s grandmother, Kris Jenner.

The reveal came during an episode featuring a lengthy interview with the rapper Daddy, who discussed, among other things, his relationship with Kardashian and the effect that fatherhood has had on him. (“I was just like a crazy rock star,” West — who has a reputation for being hot-headed — said of his pre-parenthood days.)

So … how long before North West has her own reality show? Share your predictions in the comments section.

Watch the magic unfold in the video: