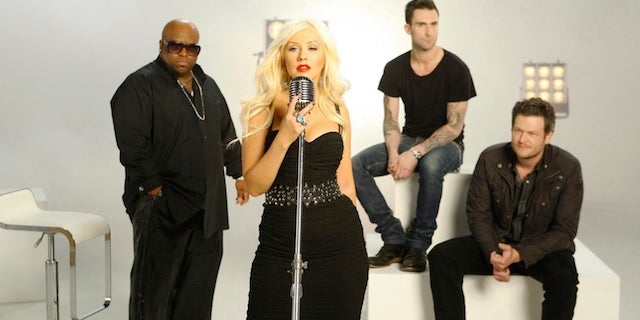 The gang's back together!

NBC announced on Friday that pop diva Christina Aguilera and funk singer Cee Lo Green will be reuniting with pop star Adam Levine and country singer Blake Shelton for Season 5, as TheWrap was the first to report.

The network also said that Shakira and Usher are set to return on Season 6, which will air in midseason 2014.

"We locked in a plan several months ago to have the outstanding Christina Aguilera and Cee Lo Green rejoin Blake and Adam for cycle 5, and we're pleased to announce that the original four coaches are going to be back together in the fall," said president of alternative and late night programming Paul Telegdy in a statement.

"They're the reason this show was launched so strong for the first three cycles and we owe them a debt of gratitude. And after careful consideration of everyone’s schedules for next spring, we are excited to be returning the current cycle of judges – Shakira and Usher along with Blake and Adam – for cycle 6, which will premiere after the Winter Olympics," he continued.

Green just inked his contract to return this week. Aguilera is set to return with a $12 million base salary with the potential to reach $17 million, an individual with knowledge of the deal told TheWrap.

Aguilera took Season 4 off to focus on her "Lotus" album and tour. Meanwhile, Cee Lo Green took off to work on new music and his Las Vegas residency. They were replaced by Shakira and Usher on the current season.

"I am so thrilled that our 'Voice' family has grown from four coaches to six," said executive producer Mark Burnett.

"This show thrives on the ability of our coaches to continue to balance their enormous music careers with working on 'The Voice' to coach some of the best undiscovered talent in America," he continued. "The coaching panel of Christina, Cee Lo, Adam and Blake was at the heart of this show in its first three seasons and we are so lucky to have found equal success with Shakira and Usher in season four. Our best seasons are ahead of us."

"The Voice" has quickly risen to the top of the reality talent show ranks over its past four seasons. Last year, it took "Idol's" spot in the Emmy race, replacing it among the nominees in the Outstanding Reality Competition category.

In April, it reached a ratings milestone when its two installments took the top two slots for the week in both the advertiser-coveted 18-49 demographic and in total viewers for the first time in the series' history.