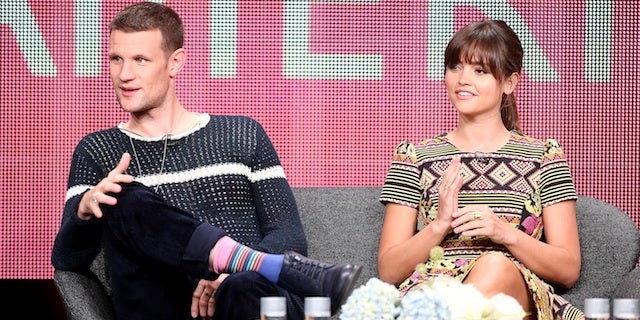 BBC America's "Doctor Who" carried on its U.S. tour of sorts at Thursday's Television Critics Association Press Tour in Beverly Hills after hitting San Diego Comic-Con over the weekend.

As much as the panel was to speak of the upcoming 50th Anniversary episode airing Nov. 23, the discussion really centered mostly around Matt Smith's planned departure during the special.

At first, Smith played down the episode's significance for his turn as the iconic British character. "It's kind of business as usual," he said about shooting the episode in which John Hurt enters the Who Universe and features the return of previous Doctor, David Tennant.

Also read: TCA: 'They Wanted to Kill Doctor Who

He would later refer to his desire to do something different in his career: "I've done it for four years and we shoot nine to 10 months per year," he said. "The show has come to a natural tipping point. I'll miss it. It's a hard choice."

That doesn't mean the actor — who is starring in Ryan Gosling's directorial debut, "How to Catch a Monster" — hasn't had second thoughts.

"I've pondered it and I've thought I've made a huge mistake," the 30-year-old said. "It has transformed my career. It has been wonderful for my life and my family's life."

Producer Marcus Wilson confirmed early reports that the producers had tried to talk Smith out of leaving. But, his departure seemed to be something Smith had known would come for at least a couple seasons already.

"I feel proud to be part of such a wonderful legacy of the actors," Smith said. "The 50th anniversary will honor the ones before me. Then, the show will get bigger and better. People will forget me."

"I'm only slightly in denial that Matt is leaving," Jenna Coleman, the Doctor's current companion, said.

Producer Marcus Wilson didn't spill much about the search for the new Doctor. "The search is ongoing," he said.

"You just want the best actor for the role. You just kind of cast the net wide and hope you find something brilliant," he continued.

What's interesting about the 50th Anniversary episode and the messaging from the panel is that it, Smith's departure, and the arrival of the new Doctor all seem geared toward bringing in new fans to the show. The show is "accessible" both Smith and Wilson said. That's not always quite true as even the season's throughline story can get complicated, but they argue otherwise.

"The great thing about 'Doctor Who' is that you can jump in with any episode at any time," Smith said.

Later, Wilson added his pitch for new viewers. "It's a show about hope, adventure and about excitement," he said. "It's very accessible and you'll have a good time."