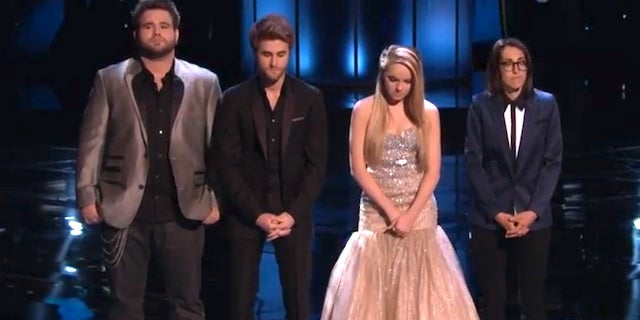 NBC's "The Voice" crowned its Season 4 winner on Tuesday's finale.

Note: Spoilers ahead if you haven't watched Tuesday's finale.

The Texas native was speechless once she heard her name announced as the winner and was unable to finish performing her victory song, Sara Evans' "Born To Fly," which she performed to much praise on Monday's episode. At 16 years old, Bradbery is the youngest winner of the NBC competition's run.

Also read: As Music-Competition Shows Slide, What Does It Take to Make a Hit?

A parade of stars performed on "The Voice" stage during the two-hour preamble to the winner's announcement.

Cher performed her newest single, "Woman's World," off her upcoming album. And after taking the season off from coaching, a slimmed down Christina Aguilera performed with Pitbull on their single, "Feel This Moment"; Country act Florida Georgia Line and rapper Nelly performed "Cruise"; and Bruno Mars staged a big band throwback with "Treasure."

Aside from group performances with returning contenders, the finalists got the chance to duet with guest star performers: Bradbery with Hunter Hayes, The Swon Brothers with Bob Seger and Chamuel with OneRepublic.

Also read: 'The Voice' Winner: Who Did the Experts Choose?

Bradbery's season will go down as one of the show's most memorable. It took the risk of replacing Aguilera and Cee Lo Green with Usher and Shakira and it paid off. Viewers accepted the new coaches very quickly and the show held on to its ratings numbers compared to its previous season.

In May, TheWrap was the first to report that Aguilera and Green are returning for Season 5. Soon after, NBC announced that Shakira and Usher would return for its sixth season.

Most notably, this season held on to its viewers while Fox's "American Idol" saw a more than 20 percent drop in its Season 12 ratings followed by the departures of judges Randy Jackson, Mariah Carey and Nicki Minaj.

The departure of longtime reality chief Mike Darnell would signal unrest for "Idol." Big changes are going down at the rival talent show as TheWrap reported first that Fox had fired founding executive producers Nigel Lythgoe and Ken Warwick.

Fox would then place David Hill, a seasoned executive at its parent company News Corp., in charge of overseeing "Idol" and "The X Factor." That was followed by the hiring of Swedish "Idol" producer Per Blankens as "Idol's" showrunner.

When we asked "Voice" producer Mark Burnett why "The Voice" continued to thrive with viewers while "Idol" was faltering, he said "The audience had gravitated toward 'The Voice' mainly because it's a kinder show. There's no humiliation on it. I feel that that's very, very important with audiences."

Watch the moment in which Bradbery is named the winner below: