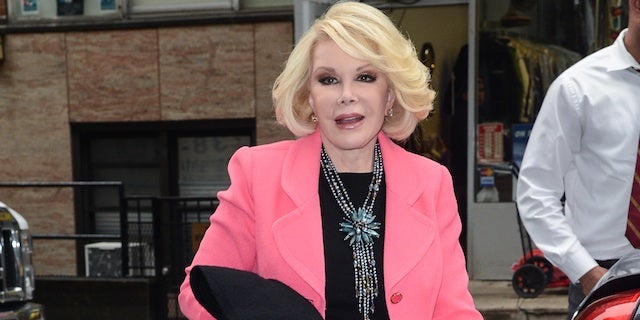 Joan Rivers didn't mince words in response to the Writers Guild of America's allegations that she broke its bylaws during the "Fashion Police" writers' strike.

“This is such a bunch of bulls–t,” she said Friday. “E! should hire Anthony Weiner to work with these people. He’d fit right in.”

As we previously reported on Thursday, the WGA decided it would convene a three-person panel to review whether Rivers, a guild member, violated its bylaws by functioning as a writer at the same time that her writing staff – which is trying to force the E! Entertainment show to recognize them as WGA employees – is on strike. Penalties could be as severe as a fine or expulsion.

It's unclear whether her statement will be used against her at the hearing, and no one at the WGA was commenting Sunday, but it's hard to imagine it helping.

The hearing, which has yet to set a date, will give Rivers the opportunity to present her case directly to the trial board, which will also hear evidence, which will include testimony from the striking writers.

Nine “Fashion Police” writers have been on strike since April 17 after expressing a desire to organize and join the WGA West. The writers want the network to recognize the WGA as their bargaining representative, while the Comcast-owned E! Network is insisting that a National Labor Relations Board election be held first.

Weeks before going on strike, the writers filed $1.5 million in wage and hour claims with the California Division of Labor Standard Enforcement against the network and Rivers' production company, Rugby productions. They are seeking payment for regular and overtime hours that they say they worked but were not paid for.

The WGA helped their writers file the claims and has sanctioned the strike, and told its 12,000 members that they should not work on the show until the matter is settled.

Rivers had previously released a statement saying she supports the writers' right to organize.