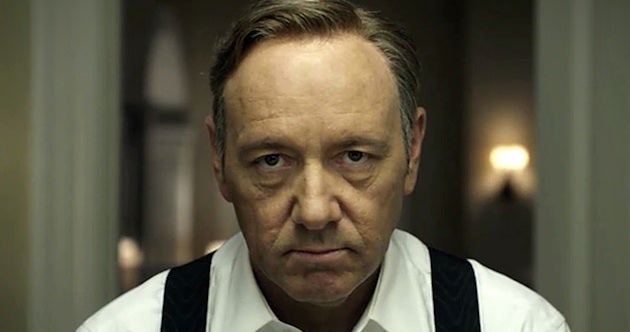 Emmy voters rewrote the definition of television on Thursday morning as Netflix's buzzed-about "House of Cards" crashed the Emmy nominations with a stunning nine nominations.

In an extraordinarily competitive Outstanding Drama Series category, Television Academy voters put a show that rolls out new episodes all at once up against five that stick to the traditional timeline of once a week.

And for only the second time in history (albeit the second year in a row), voters in the Emmys' drama category went with a slate of shows that didn't contain a single series from any of the broadcast networks.

WIth these choices voters conceded that it's a brave new world in television, making Beau Willimon's political drama a game-changer that parlayed Netflix's multi-faceted Emmy campaign into nods for actors Kevin Spacey and Robin Wright (though surprisingly not supporting-actor candidate Corey Stoll).

As TV Academy president Bruce Rosenblum said in introducing the nomination anouncement, "Television is on broadcast, on cable and on demand on the internet."

The presence of "House of Cards" in a category that also included perennial nominees "Mad Men," "Breaking Bad," "Downtown Abbey," "Homeland" and "Game of Thrones" likely edged out FX's Cold War series "The Americans," which was considered the other new show with a chance of breaking into the category.

On the comedy side, Netflix fell short of a double play when "Arrested Development" failed to make it into the Outstanding Comedy Series category, one of the few areas in which the broadcast networks still hold their own with the likes of "Modern Family," "The Big Bang Theory" and "30 Rock." Those three series are vying with FX's "Louie" and HBO's "Girls" and "Veep."

But "Arrested" did land three nominations after a return that received mixed reviews. Among its nods were an Outstanding Lead Actor in a Comedy Series nod for Jason Bateman.

Netflix also won two nominations for its series "Hemlock Grove," giving the upstart 14 nominations in all.

On the other hand, the time-honored Emmy goliath HBO asserted itself once again, racking up 108 total nominations to more than double the two runners-up, CBS and NBC, which received 53 nominations each.

The numbers were closer to the dominant HBO showing from two years ago, when it landed 104 noms to the second-place network's 51, than to last year's lead of only 81 to 60 over second-place CBS.

A few favorites were left out in the cold in a largely predictable group of nominations: past winners Julianna Margulies for "The Good Wife" and Jon Cryer for "Two and a Half Men," Steve Buscemi for "Boardwalk Empire," which also failed to land a drama-series nod, and, in the comedy-actress category, former winner Melissa McCarthy ("Mike and Molly") and last year's nominee Zooey Deschanel ("New Girl").

Perhaps most surprisingly, two-time winner Eric Stonestreet became the only one of the six main cast members of "Modern Family" not to land a supporting actor or actress nomination; while Ty Burrell, Jesse Tyler Ferguson, Ed O'Neill, Julie Bowen and Sofia Vergara were all nominated, Stonestreet was left out for the first time in the show's four years on the air.

The least predictable category may well have been the reality-show host category, in which seven-time winner Jeff Probst ("Survivor") was bypassed for the second year in a row, and so was Phil Keoghan of "The Amazing Race" and Carson Daly of "The Voice."

Instead, last year's winner, Tom Bergeron ("Dancing With the Stars") will compete with Cat Deely ("So You Think You Can Dance"), Ryan Seacrest ("American Idol"), Heidi Klum ("Project Runway") and Anthony Bourdain ("The Taste"). No show was completely dominant, the way some have been in past years. Ryan Murphy's "American Horror Story: Asylum" (right) led all programs with 17 nominations, one more than HBO's "Game of Thrones," but its success is largely attributable to the fact that the series got a special ruling that qualified it in the far less competitive miniseries or movie categories, where it can rack up noms it would not have received if it had competed as a drama series.

"Game of Thrones," meanwhile, was predictably strong in the tech categories, but also landed three acting nominations (for Peter Dinklage, Emilia Clarke and Diana Rigg) to reach the most noms it has received in its three seasons.

Steven Soderbergh's HBO movie "Behind the Candelabra" tied "Saturday Night Live" with 15 nominations — and the "SNL" nods helped that program break its own record as the most-nominated series ever, with 171 noms over the past three decades.

The most nominated individual in Emmy history, cameraman Hector Ramirez, broke his own record with three more nominations, running his personal total to 71.

But the man of the morning may have been comic Louis C.K., who received nine separate nominations for acting, writing, directing and producing his own series and his comedy special, and for hosting "Saturday Night Live."

In its final season, "The Office" only received three nominations — though that's three more than the comedy received last year, when it was shut out completely.

And "The Americans," which was considered a strong contender for a drama-series nod and a couple of lead-acting nominations, had to settle for one guest-actress nom for Margo Martindale and another for its music.

And speaking of music: Emmy voters have given songwriter and composer Alan Menken the opportunity to become only the 12th person to win the EGOT, the rare Emmy-Grammy-Oscar-Tony grand slam. Menken already has a Tony and multiple Grammys and Oscars, and he received an Emmy nomination for his song "More or Less the Kind of Thing You May or May Not Possibly See on Broadway" from the ABC comedy "The Neighbors."