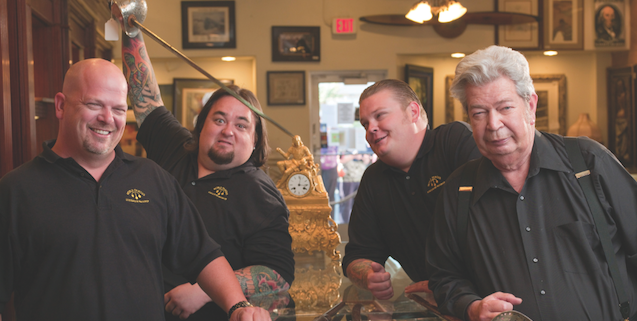 Can we get real here for a minute?

And by get real, I mean real as in reality, as in reality-TV shows that, let’s face it, have no chance of walking the Emmy red carpet until it starts snowing in Dante’s neighborhood. It is no secret that the Emmys are one thing, and many of the most high-profile reality shows are another thing, and virtually never the twain shall meet. Voters want shows that represent the best of us, that make us feel creative, that they don’t have to apologize for a year or a decade later. (Obviously, it doesn’t always work that way.) Others don’t seem to fit but squeeze in on occasion: "Taxicab Confessions" got a couple of noms back when the genre was young,

Look, there’s a reason why "Antiques Roadshow (pictured left) always gets nominated and "Pawn Stars" (at top) never does.

Face it, they’re kind of the same show, except that in "Pawn Stars" the people doing the appraising are funnier, have way more tattoos and give you a 15-second history lesson about Ben Franklin or the Rat Pack every time somebody brings in a tchotchke, apparently to justify the fact that the show is on the History Channel.

But "Roadshow" seems classy and "Pawn Stars" doesn’t, and that makes all the difference.

Call it snobbery, call it what you will, but take it to the bank. I remember sitting at the first Critics Choice Television Awards ceremony back in 2011 and hearing the ear-splitting squeals from the "Real Housewives of Beverly Hills" table when that show tied with "Hoarders" for Best Reality Show.

I imagine you can attribute part of the giddiness that afternoon to the fact that they knew this was one of the few awards they’d ever win.

On second thought, maybe they thought the CCTA win would presage a slew of Emmys. I mean, one of the things that’s entertaining about reality stars is that they’re so dang delusional, whether it’s "Survivor’s" Phillip Sheppard ignoring the fact that everybody else in the game thinks he’s a pompous fool, or the cast of "Jersey Shore" looking into mirrors and liking what they see, or "Storage Wars’" Dave Hester insisting that every junky storage locker he buys is a treasure trove that will make him lots of money and prove that all his competitors are morons.

(Hey, "Storage Wars": Can you do a follow-up episode where you revisit the haul from one show’s worth of lockers a year later, so we can find out how much the buyers actually got for that stuff? Just askin’.)

Given how slowly big awards bodies change, it’s silly to expect that 15,000 Emmy voters will suddenly decide that deliberately and sometimes delightfully trashy shows deserve gold statuettes. So maybe those shows should just embrace their dirty outsider status instead of trying to wrangle invitations to a club that would really rather they used the service entrance.

Besides, we live in the era of "Mad Men" and "Boardwalk Empire" and "Breaking Bad" and "Justified" and "Veep" and "Girls" and "Modern Family" and "Downton Abbey" and "House of Cards" and "Portlandia" and "Game of Thrones" and lots of other great shows that are making a pretty strong argument that this is the real golden age of television. Without some entertaining trash to counterbalance all that brilliance, how can we hang onto our time-honored belief that television is a vast wasteland?

So thank you, all you B- and C- and D-list reality shows, for lowering the bar and giving us something to put on when we really don’t want to think too hard. You’re providing a valuable service, and we’re grateful. Just don’t expect that it’ll get you to the stage of the Nokia Theater.