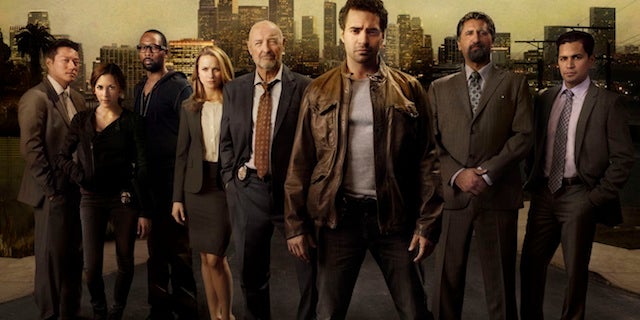 After rolling out its new schedule for the 2013-2014 season at Monday's upfront presentation for advertisers in New York City, Fox released first looks at seven newly picked up series.

Watch the previews below along with Fox's descriptions.

"Surviving Jack": A new single-camera ensemble comedy based on best-selling author Justin Halpern’s autobiographical book, “I Suck at Girls.” Set in 1990s Southern California, Emmy Award nominee Christopher Meloni (“True Blood,” “Law & Order: Special Victims Unit”) stars as a man becoming a dad, as his son (Connor Buckley, “Deception”) is becoming a man, in a time before “coming of age” was something you could Google.

"Rake": Academy Award nominee and Emmy Award winner Greg Kinnear makes his broadcast television series debut in the bold new legal drama RAKE, created by Peter Duncan and executive-produced by Peter Tolan and Michael Wimer. Kinnear is KEEGAN DEANE, one of life’s great addicts, a brilliant and frustratingly charming criminal defense attorney, whose chaotic and self-destructive personal life often gets in the way of his professional one. Keegan takes on the cases that nobody else will touch, ruled by a resolute optimism, belief in justice and dogged determination to defend those who seem beyond redemption – much like himself.

"Us & Them": Based on an award-winning BBC series and starring Emmy Award nominee Jason Ritter and Alexis Bledel, US & THEM is a new single-camera ensemble comedy about a young couple, whose path to happily-ever-after is complicated by the screwed-up circus of people closest to them.

"Almost Human": Executive-produced by Emmy Award winner J.J. Abrams and creator J.H. Wyman and starring Karl Urban and Michael Ealy, ALMOST HUMAN is a high-tech, high-stakes action drama set 35 years in the future, when police officers are partnered with highly evolved human-like androids. An unlikely partnership is forged when a part-machine cop (Urban) is forced to pair with a part-human robot (Ealy) as they fight crime and investigate a deeper cover-up in a futuristic new world.

"Brooklyn-Nine-Nine": From Emmy Award-winning writer/producers of "Parks and Recreation" and starring Emmy Award winners Andy Samberg and Andre Braugher, BROOKLYN NINE-NINE is a new single-camera workplace comedy about what happens when a hotshot detective (Samberg) gets a new Captain (Braugher) with a lot to prove.

"Enlisted": Starring Geoff Stults, Parker Young and Chris Lowell, ENLISTED is a new irreverent and heartfelt single-camera comedy that follows three brothers getting to know each other again on a small Florida Army base and the group of misfits who surround them.

"Sleepy Hollow": From co-creators/executive producers Alex Kurtzman and Roberto Orci, the thrilling new action-adventure SLEEPY HOLLOW is a modern-day retelling of Washington Irving’s classic. ICHABOD CRANE (Tom Mison) is resurrected and pulled two and a half centuries through time to find that the world is on the brink of destruction and that he is humanity’s last hope, forcing him to team up with a contemporary police officer (Nicole Beharie) to unravel a mystery that dates all the way back to the founding fathers.