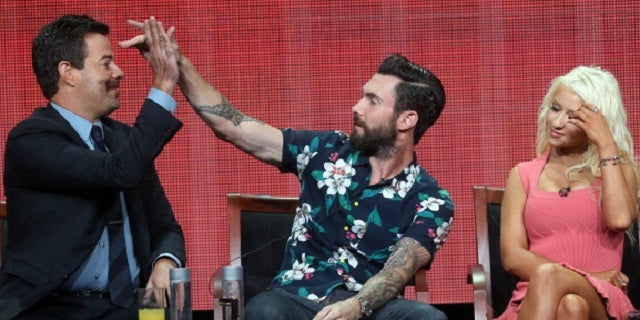 Adam Levine might not hate America, but he's apparently not a big fan of the response that he received after saying he did.

"The Voice" coach groused about the reaction to his offhand "I hate this country" comment, which he muttered into a hot mic on the show earlier this year because he was frustrated by  voting results on an episode. He said what followed was "stupid media hype."

"If your intentions are good, if someone misunderstands you, regardless of what the scenario is, I think people can see through stupid media hype — no offense," Levine said at a Television Critics Association panel, addressing a room full of reporters.

"As long as you allow yourself to be who you are, you can't really defend every single thing you say," Levine added.

Levine and his "Voice" cohorts Christina Aguilera, Cee Lo Green and Carson Daly also addressed the show's track record with breaking new talent. While the show, which is going into its fifth cycle in September, has yet to produce a breakout star, Levine and the others emphasized that its primary goal is to support and nurture talent, not to push it to the top of the charts.

"There's been a lot of success depending on how you define the term success," said Levine, who also noted, "if you're not in the negative in this business, you're succeeding."

"The immediacy of winning and becoming a huge star is a fairy tale that I'd love to see take place, but it's still a fairy tale," he added.