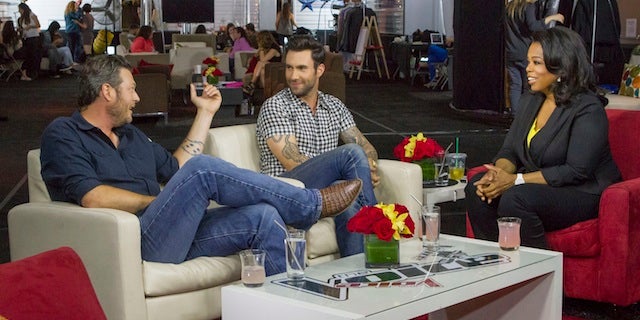 Oprah Winfrey got personal with NBC's "The Voice" coaches for the next episode of "Oprah's Next Chapter" airing Sunday at 9/8c on OWN.

As TheWrap was first to report, Winfrey spent a day at "The Voice" set a couple weeks ago and took the opportunity to ask Adam Levine if he could clarify his stance on marriage.

"And what's your theory on marriage?" she asked Levine, which prompted coach Blake Shelton to shift himself on the couch in order to catch the answer.

"Hearing Blake talk about it, it's great. I'm a fan of marriage," the Maroon 5 frontman, who's dating began. "People think that I keep pooh poohing marriage and I love it and I want to probably be married at some point." She also wondered if new coaches Usher and Shakira took any credit for "The Voice's" increased viewership this season, which led to ratings wins over Fox's "American Idol."

"Oh, I don't want to claim that we're guilty of all charges here but I do feel that there is a special chemistry between us four," Shakira said.

Winfrey also spoke to Shakira about the challenges of motherhood, Usher's experience growing up in the spotlight and spent some time with host Carson Daly, social media correspondent Christina Milian and executive producer Mark Burnett.

Watch the preview videos below: