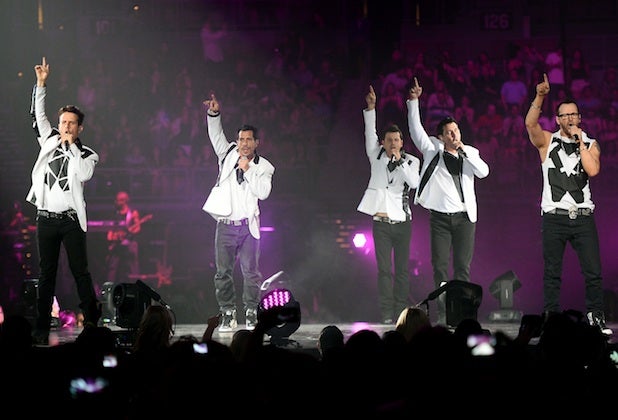 Previously in development, “Rock This Boat: New Kids on the Block” has been given a series order by TV Guide Network.

The cable channel has also announced that it is developing three other nonscripted projects on its upfront programming slate for 2014-2015.

From Jarrett Creative Group with executive producer and NKOTB bandmember Donnie Wahlberg, “Rock This Boat: New Kids on the Block” follows the guys during their popular series of fan cruise. TVGN has ordered eight episodes of the series to debut in Fall 2014. Additionally, TVGN will air a 30-minute casting special.

Among the new series in development at the network is currently titled “Sing It On,” which comes from “American Idol” and “So You Think You Can Dance” producers CORE Media.

Finally, TVGN is developing travel series “Jet to the Set (Working Title),” which visits the hottest TV and movie locations, as well as the local hotspots visited by the actors who work there. It comes from producers Rogue Atlas Productions in association with Lionsgate Television, with Laurie Feltheimer, Carly Steel and Eli Frankel serving as executive producers.

“Our programming celebrates entertainment and celebrity in a fun, vibrant tone and often with a comedic perspective that delivers the excitement of being a fan — because we’re fans too,” said TVGN’s entertainment and media president Brad Schwartz. “From the fan-fueled party cruise phenomenon with New Kids on The Block to celebrity-obsessed daily show ‘Popsugar Now’ to the best after-show on television ‘Big Brother: After Dark,’ we are putting ourselves right in the middle of fandom culture.”

Read TVGN’s full descriptions for the three shows in development below:

SING IT ON (Working Title)
From the company behind “American Idol” and “So You Think You Can Dance,” SING IT ON is the real-life “Pitch Perfect,” with steeper competition and higher stakes. This docu-series follows the world of collegiate a cappella groups across the U.S. and their journey as they prepare for and compete in the top a cappella competition in the country, the ICCA (International Championship of Collegiate A Cappella). SING IT ON is produced by a CORE Media Group company, with Jennifer O’Connell and Teri Wagner Flynn serving as Executive Producers. Jenny Ramirez, Glenn Stickley and Amanda Newman serve as Co-Executive Producers.

SOAP TOWN (Working Title)
From the producers of “Hatfields & McCoys” and “Gene Simmons Family Jewels” comes SOAP TOWN–a new docu-series which follows a group of former daytime and primetime soap stars as they attempt to produce a new primetime serial drama to star in. The cast will need to work in front of and behind the cameras as they develop, pitch, and produce this new steamy series hoping to land a pilot deal by the end of the season. SOAP TOWN is being produced by Thinkfactory Media, with Adam Reed, Adam Freeman and Leslie Greif, serving as Executive Producers.

JET TO THE SET (Working Title)
This travelogue show is a mix of Hollywood lifestyle and adventure, as viewers are transported to TV and film locations across the country to unveil the hottest hotels, restaurants, beaches, bars, nightclubs and retail stores that celebrities frequent while on location. The show will feature travel experiences from two perspectives–economical versus splurge. JET TO THE SET is produced by Rogue Atlas Productions in association with Lionsgate Television, with Laurie Feltheimer, Carly Steel and Eli Frankel serving as Executive Producers.