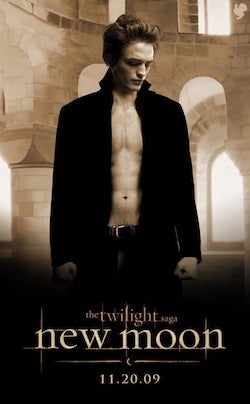 “The Twilight Saga: New Moon” rose to No. 1 at the international box office this weekend with $118.1 million, outpacing Roland Emmerich’s disaster epic “2012,” which held strong with $100.5 million in its second week of release.
“New Moon” failed to keep pace overseas with its hair-raising $140.7 million domestic take, but only played in 25 foreign markets for openers.
The teen vampires-and-werewolves sequel played well in the U.K. ($18.7 million), France ($17 million), Spain ($13.7 million) and Italy ($13 million). It also set opening records in Australia and New Zealand, with $13.3 million and $1.9 million, respectively.
The strong showing both at home and abroad boosted the film’s opening weekend gross worldwide to $258.8 million. "Twilight" grossed $384 million worldwide during its entire run in 2008.
“2012” saw a 40 percent drop over its No. 1 offshore open of $165.2 million, but has hauled in $341.1 million overseas in its first two weeks.
"Disney’s A Christmas Carol" keeps ticking along abroad, finishing third for the weekend with $18.5 million. Robert Zemeckis’ 3D version of the Charles Dickens classic has made a cumulative $60 million overseas so far.
x
Looks like you're enjoying reading