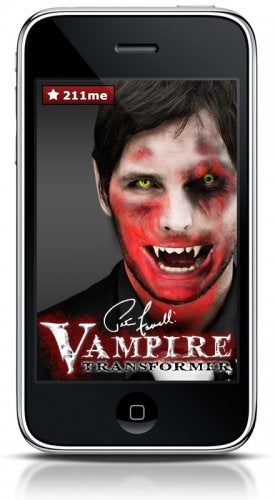 Some guys just don’t know when to stop.
Peter Facinelli has swooped into the wallets and beating hearts of movie fans everywhere as Carlisle Cullen the perfect town doctor and Vampire father in “Twilight” and “New Moon.” On the tube, he’s been getting critical acclaim for his role as the grabby and woefully ignorant Dr. Fitch Cooper on Showtime’s “Nurse Jackie,” with Edie Falco.
So what does he do? Facinelli goes and develops an iPhone app that lets you become the bloodsucker of your dreams as well as share it across social media networks.
Why did you decide to throw your hat in the app ring?

I wanted to make something for the fans that I thought they would enjoy. What better than to have them be able to make their own coven in a fun, artistic way?
Sure, the Vampire Transformer app is fun if you’re a “Twilight” fan, but what’s the appeal if you’re not playing for either Team Edward or Team Jacob?
There are a bunch of different vampires to choose from, from Team Edward to Team True Blood. You get make your victim as beautiful or as gory as you want. Or if you’re not a vampire lover, you can import a picture of whatever you’re into — and transform yourself or others into that, too.
What are some of your favorite professional and personal Apps?
I use Tweetie on a daily basis. And my kids have downloaded a ton of games, so whenever we’re on a plane, or in a car they always ask to play with my phone. My 6-year-old loves Vampire Transformer. And she’s getting really good at making some cool vamps. Must run in the family.
Can we expect a Dr. Fitch Cooper App from you next?
Dr. Cooper should have his own app. I envision it to be much like the game Operation.
x
Looks like you're enjoying reading