Who would have thought, all these years later, that Joseph Mazzello and James Badge Dale would be working together! 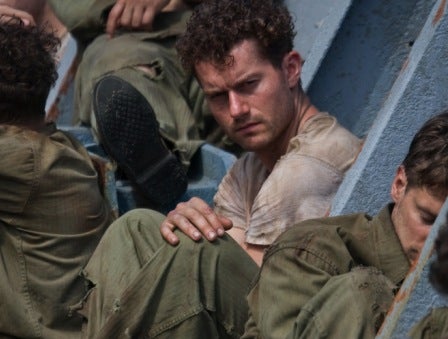 After all, Badge was the original star of the infamous (though now lauded) Guber/Peters fiasco “Radio Flyer.” And when Jon Peters’ vision of the film failed to pass muster, and everyone from writer-director David Mickey Evans to my friend Rosanna Arquette (who played the mom before Lorraine Bracco was brought in) to Badge was fired, well, I had no idea what would happen to him.

(Rosanna’s manager was my roommate, Jane Hoffman. And let’s put it this way: Rosanna has never talked to me again!)

Joey Mazzello was one of the actors hired to replace him … and he went on to star in the highest-grossing movie series of the ‘90s, the “Jurassic Park” films.

But we all knew Badge was special. Now we get to see that specialness again in HBO’s 10-part, $150 million production “The Pacific.” It’s a coda to the HBO/Steven Spielberg/Tom Hanks epic of WWII’s European theater, “Band of Brothers,” perhaps the best war saga ever shot.

Too weird to be true: It was Tom Hanks who played the adult in “Radio Flyer” (after Badge was let go) who is now producing “The Pacific” along with his “Band of Brothers” partner Spielberg, who cast Joey, one of Badge’s replacements, in “Jurassic”!

Even more ironically (or not), it is once again Badge who leads off the series as PFC Robert Leckie in part one of "Pacific"; only in part four does Joey join the show as Corporal Eugene "Sledgehouse" Sledge.

I honestly felt sorry for Badge the day the initial version of “Radio Flyer” was canceled.

We all know how hard these young kids work — I manage a few of them myself now, including the stars of “4 Single Fathers,” Rachel Dolan and Salvatore Santone — and what they give up to follow their dreams.

In fact, the third star of “Radio Flyer” (who went on to star in the highest-grossing movie series of the 2000s, “The Lord of the Rings”) was Elijah Wood, who apparently had given up an idyllic life in Omaha with his mom to move to L.A. and live in near-poverty (as I heard it) to pursue his dreams 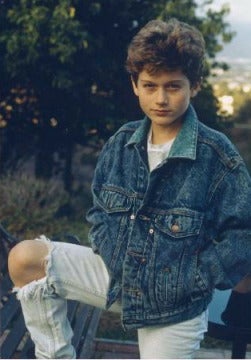 And it all worked for him — as it did for Joey.

But for poor Badge, nothing seemed to work.

According to IMDb.com, for instance, “In 1990 [when we were shooting ‘Radio Flyer’] he was 12 years of age and he’s finished school, attended college, played hockey and worked construction…what the hell was he doing between ‘90” and now, they wonder?

I can’t answer the above, since quite frankly I’ve been a little busy producing a couple dozen movies myself (someone has to pay for baby’s new shoes!), but I’m just glad to see him back.

In case you haven’t figured it out, I had something to do with all his trials and tribulations. I was the co-executive producer of “Radio Flyer,” the guy who first found it in a gym one Saturday morning and, by the next Wednesday, had helped to engineer what, at the time, was the largest script sale ever, the first one over $1 million (actually, $1.25 million if you count everything).

Thus, that initial cast, Badge and Rosanna, et al., were vitally important to us … and to me.

Unfortunately, as Entertainment Weekly pointed out in a sterling article by Gregg Kilday in 1992, the fates were not with us. Two weeks in, the studio decided to replace the original writer-director, David Mickey Evans (who has gone on to a splendid career as director of, among other things, "The Sandlot”), as well as Rosanna and Badge.

David I knew was going to do fine, as was Rosanna (who managed to bounce back two years later as a star of the Academy Award-winning “Pulp Fiction,” among others).

But with Badge and his screen brother being replaced by Joey and Elijah, well, who knew? And it hurt.

So I can’t help but use this space to wish him the best with “The Pacific” — and to wonder, with irony, if he knows it was his “Pacific” co-star Joey who knocked him out of his first big role? Or that it was his producer, Tom Hanks (who would have played his grownup self in the original version of the film) who saved him?