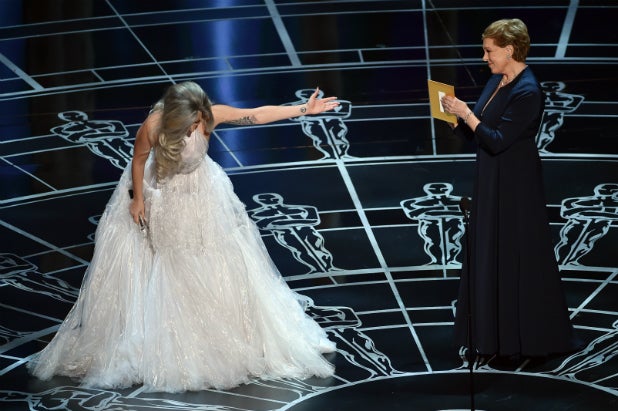 Lady Gaga and Julie Andrews at the Oscars

And the award for Biggest Social Media Moment goes to Lady Gaga.

Twitter and Facebook shared their buzziest Oscar moments, and the singer’s “Sound of Music” medley followed by the appearance of Julie Andrews ranked No. 1 on both social networks.

Gaga received a standing ovation for her tribute to the movie musical’s 50th anniversary, which included “The Hills Are Alive,” “Edelweiss,” “My Favorite Things,” and “Climb Every Mountain.” But the biggest praise came from Andrews, who played Maria in the 1965 film. “Thank you for that,” gushed Andrews as she took the stage. “It really warmed my heart.”

While Twitter didn’t disclose the actual number of tweets powering the 140-character conversation around Gaga Sunday night, there were 5.9 million Oscar-related tweets overall that were seen by a unique audience of 13 million people.

Facebook revealed that Lady Gaga’s stage time topped out at 154,000 people per minute talking about Mother Monster in the U.S. and 214,000 people globally. (Overall, 21 million people had 58 million interactions related to the Oscars on Facebook.)

And that’s where the social media similarities end.