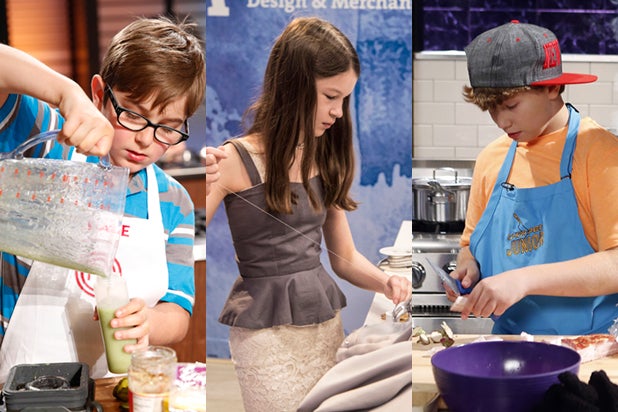 It takes only one hit to spark a trend in reality television. The latest appears to be spinoffs featuring kid contestants.

But the onscreen competitors in these shows aren’t the only ones under pressure. Producers and grown-up stars have labor laws, online trolls and a host of other challenges to worry about.

Fox premiered “MasterChef Junior,” based on its Gordon Ramsay-hosted cooking competition show, in 2013. The show proved to be a ratings and critical success. Season 4 premiered on the network last week.

“I hear a ton of people tell me it’s the only show they can watch as a family,” “MasterChef Junior” host Graham Elliot told TheWrap. “Their kids love it, they love it, their teenagers love it. It’s a good substitute for being around the table and eating together, if you don’t have the time to do that.”

Also read: Why CBS Is Loading 'The Amazing Race' With Social Media Stars

And according to Elliot, that appeal isn’t limited to “MasterChef Junior” and other cooking shows such as “Chopped Junior,” which debuted on the Food Network last month. It’s a twist on the reality genre that could be applied to any number of other series.

“I don’t see it as a fad,” he said. “Even though we laid the groundwork and were kind of the first ones to do it, I do see a lot of different shows kind of taking the same idea and running with it. So it’ll be interesting to see where it is in a year or two.”

Also read: NATPE Doubles Down on Reality Programming in 2016

This Thursday, Lifetime will debut its own addition to the canon with “Project Runway Junior.” The new spinoff of the long-running fashion-design show will feature teenagers 13-17 competing in the exact same format as the adults have for 14 seasons.

“We felt like the strongest show was just to take the ‘Runway’ format and put teenagers in it,” executive producer Sara Rea said, admitting that people had been suggesting the idea to them for years. “To me, it’s just that these guys are so talented that they’re inspiring. Watching them day-in and day-out, it’s just fascinating to see how focused, mature and driven they are.”

But Elliot said that it’s easy to forget that the kids on set are kids. “By day two or three of filming, you do forget the age difference, because they’re just so skilled that you don’t really take that into consideration.”

Although, when it comes to judging, he said they do have to be conscious of the fact that “MasterChef Junior’s” contestants are sometimes as young as 9 years old. The judges, Elliot, Ramsay and Christina Tosi, aims to be “more coach-like” than they are with the adult contestants of “MasterChef,” he explained.

Introducing children into a series also requires additional considerations. On “MasterChef Junior,” the safety of the contestants is a serious concern. Because they’re in the kitchen and working with hot stoves, sharp knives and heavy pots and pans, the show has to take extra precautions to ensure their safety.

On “Project Runway Junior,” the main challenge is time. With strict limits about the amount of time minors can work on the show, Rea admits that producers struggled to also give contestants enough time to complete runway-ready designs.

Regardless of format, one concern among any television show featuring kids, though, is the intense scrutiny faced by anyone in the public eye. When Season 14 of “Project Runway” wrapped its run last month, winner Ashley Nell Tipton immediately received enormous backlash on social media, with users claiming she didn’t deserve the title, only winning because she designed for plus-sized women.

But the spinoff show has taken some measures to protect the kids. None of the contestants’ last names have been published anywhere, and the show won’t give the “Project Runway Junior” contestants personal hashtags, as it did for their grown-up counterparts, lest they become targets for online trolls.

“We’ve also talked to the parents to kind of let them know what to expect. Or hopefully, what not to expect, but what could happen,” Rea said. “Nothing that they don’t already know, social media is not a new thing … But just to be prepared that sometimes people are not kind.”

Also read: Caitlyn Jenner's 'I Am Cait' Renewed for Season 2

But there’s only so much the show can do. At some point, producers just have to hope that people will be conscious of the fact that those are kids on the screen.

“We do all that we can, but we can’t protect them from the world,” she said. “We just have to hope that people will be decent.”