If anything could top the opening-morning panel on 3D in Hall H, with a surprise appearance, by Johnny Depp, it was the panel that followed on Summit Entertainment’s upcoming slate.

“Upcoming” as in “The Twilight Saga: New Moon.” 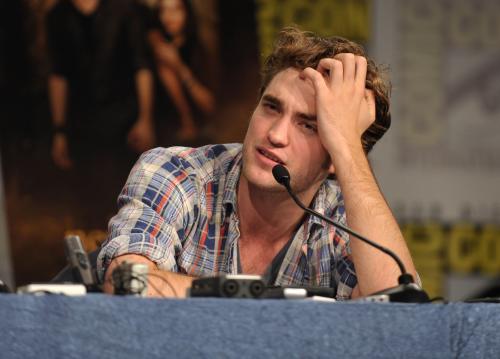 The fan reaction didn’t disappoint. After camping outside the convention center all night to catch a glimpse of Edward and Bella in person, the rabid crowd rose to its  feet and shrieked as the stars took the stage for a panel discussion and a pair of clips from the highly anticipated sequel.

In the first, Jacob Black, played by Taylor Lautner, teaches Bella (Kristen Stewart) to ride a motorcycle. But she keeps having flashbacks of her former love interest, Edward (Robert Pattinson), and jumps on the bike to try to escape her memories.

She quickly tumbles to the ground and cuts herself, and Jacob takes off his shirt as a makeshift bandage. Lautner’s half-nude figure elicited minute-long shrieks from the women in the audience — but the clip cut just as the pair seemed about to kiss.

Stewart said she didn’t actually get to ride the motorcycle in the film but was on a "dorky rig." Lautner, meanwhile, said he put on weight only to lose it because he was in the gym six to seven days a week and burning too many calories.

He said that in addition to eating constantly, acting while half-naked in jean shorts in Vancouver and drenched in cold water was difficult — but he was "doin’ it all for you guys."

In the second clip — shot in Italy — a breathless Bella runs in slow-motion through a crowd of red-robed individuals to reach Edward, who — shockingly — is unbuttoning HIS shirt. "Stop, stop, no Edward, don’t!" Bella yells before the clip ends.

Weisz said heartbreak and the ecstacy of reunion attracted him to direct the series.

"And I’ve been stalking Rob Pattinson for the last 10 years, so when I got the chance to get within touching distance of him I jumped at it," he kidded.

Logistically, he said, filming in Italy presented a large challenge because of the hundreds of fans who gathered around the set and applauded after every take. At one point, he had to go to the bathroom but couldn’t because he was afraid he’d be mobbed by fans looking for him to "set up a meeting with Rob."

Stewart said she was happy to conclude the film in Italy because she could "barely stand up" after it was all over. She was dressed in her Joan Jett garb and a new mullet-like black haircut and often dug her head into her arms or covered her mouth while sitting on the panel. She said it was difficult to snap back into the role after her character "nearly dies."

"She’s intent on doing what she needs to do for herself. Talk about mood swings, she doesn’t have to explain herself, she just feels what she feels," she said of her character.

Lautner said he hoped he was more friendly and outgoing than his "monster" of a character. In preparing to play a Native American, he said he met with members of various tribes to find out how they live, and said he was surprised to find that guys his age "went to the beach to check out girls."

One fan asked Pattison, who is also a musician, if he’d ever consider doing an open mic night again.

Looking ahead to the future films, Lautner said he was excited for "the height of the love triangle" and a "sleeping bag scene."

"Yeah, I can’t wait to actually get pregnant," Stewart joked.

"Being involved in the Caesarian, that’ll be great," Pattison added.

Earlier in the panel, Summit presented other, less scream-inducing films from its upcoming slate.

First, Kristen Bell and Freddie Highmore emerged to present the worldwide debut of the trailer for the CG-animated "Astro Boy," a story of a robot boy out to save the world, which will be released Oct. 23.

They were followed by an atttractive group of ladies set to star in the horror flick "Sorority Row," out Sept. 11, which includes Demi Moore’s daughter Rumer Willis and "The Hills" star Audrina Patridge.

After the girls took the stage, the frightening trailer played, telling the story of a girl who dies and comes back to life to haunt her Theta Pi sorority sisters.