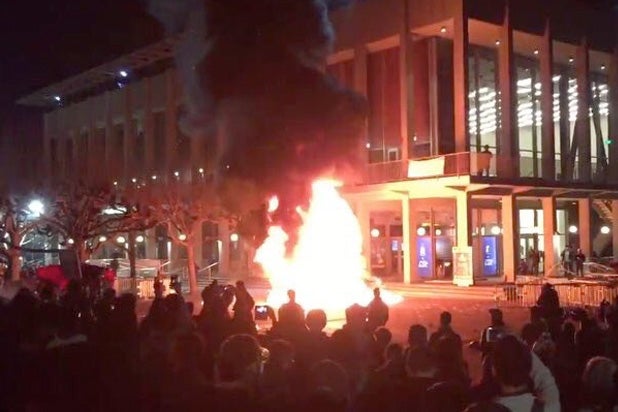 Police and protesters clashed at the University of California, Berkeley, over a speaking event at which alt-right figure and Breitbart London writer Milo Yiannopoulos was scheduled to appear. As protests intensified, the event was cancelled and the campus locked down by police, according to the SF Gate.

In a statement posted on Facebook, Yiannopolis said he was “evacuated from the campus.”

Livestreams and Twitter posts from the demonstration show protesters shooting fireworks at the building, and at least one fire small fire was set near the event. Police ordered crowds to disperse, and fired rubber pellets at demonstrators who refused the order.

A group of antifa are shooting fireworks at the building where Milo is set to speak at Berkeley pic.twitter.com/7Mtcer9ejO

Yiannopoulos has been touring college campuses since last year and his appearance have drawn repeated protests. Violence erupted during one such demonstration on January 20 at the University of Washington, Seattle, when a protestor was shot in the stomach by a supporter of Yiannopoulos. The victim survived, and the shooter was arrested and released after citing self defense.

Yiannopoulos was permanently banned by Twitter in July, 2016 after leading a racially motivated harassment campaign against “Ghostbusters” and “SNL” actress Leslie Jones.