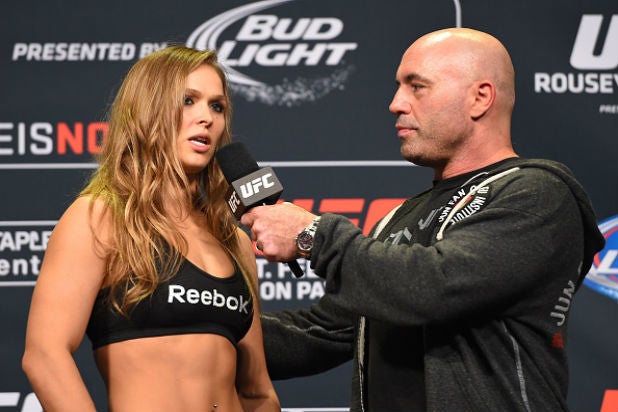 As she prepared to defend her bantamweight title in UFC 184 on Saturday at the Staples Center in downtown Los Angeles, Rousey talked to the media about everything from Mixed Martial Arts fighting to enjoying enforced drug tests and her blossoming film career.

Rousey, 28, has become known as a force to be reckoned with in the Octagon and enters the fight against Cat Zingano 10-0, having won eight out of 10 of her fights with an inescapable judo-style arm lock.

She made her big screen debut last year in “Expendables 3,” and 2015 will see her play herself in the “Entourage” movie, as well as starring alongside the late Paul Walker in “Furious 7.”

“I met him — he was a very sweet and kind person and [I wish] all my best to his family,” she said at a press conference Thursday when asked about the actor who died in a car crash in November 2013.

Weighing in at 135-pounds, the 5-foot, seven-inch blonde has been credited for turning the spotlight on women’s MMA fighting and there’s no doubt that her success on the big screen has helped attract new fans to the sport. “I definitely think the audience for MMA has expanded as a lot of people watching are first-time buyers of the pay-per-view,” she told reporters.

“I believe I’ve got to hustle to get as much attention to the sport as possible,” she said, adding that she’s considering acting again soon. “I’ve got a couple of interesting options after this fight, but first I am going to concentrate on beating Cat.”

Instead of choosing between acting and MMA, Rousey believes she is “capable of doing all of it. I prioritize fighting first, and when there’s gaps in my schedule I shift my focus to something else.”

Fortunately her two chosen professions do sometimes collide, such as while filming “Expendables 3.” “Jason Statham was kind enough to come keep me company when I training one day. I’d been away for a while and missed the presence of my coach standing there next to me when I hit the bag,” she recalled. “He was an absolute sweetheart.”

Fans of the “Fast and Furious” films can expect to see Rousey return after the upcoming seventh film, which has a release date of April 3. “I only had 10 days and they wrote something in for me … so you really got to meet my character and I expect to hear from her further down in the franchise,” she said

While she appears to take every fight easily in her stride – such as knocking out Alexis Davis in just 16 seconds in her last matchup, “Rowdy” Rousey’s biggest challenge of late was not freezing while shooting the recent Sports Illustrated swimsuit issue. “The best lighting is when the sun is rising and when it is setting, which is when it is freezing, so I was chilled to the bone at the end of the day,” she recalled of the skimpy shoot.

Next up, she will be the focus of a book written by her sister, Maria Burns Ortiz, who is an award-winning journalist. “We got approached with the opportunity to write a book and I thought that no one can really understand me and capture my voice like she could,” said Rousey. “It was a cool experience but by the end of it, she told me: ‘I don’t wanna hear about you ever again, I’m tired of you!’

“The first draft is done. I’ll finish it off … when I am done beating Cat.”

In the meantime, she also has a legacy to cement. “I want to be the most dominant female fighter of all time – and it could be argued, the greatest of my generation. I just want to retire undefeated.”

UFC 184 takes place on Saturday at the Staples Center in Los Angeles and is available on pay-per-view. The card begins at 7 p.m.