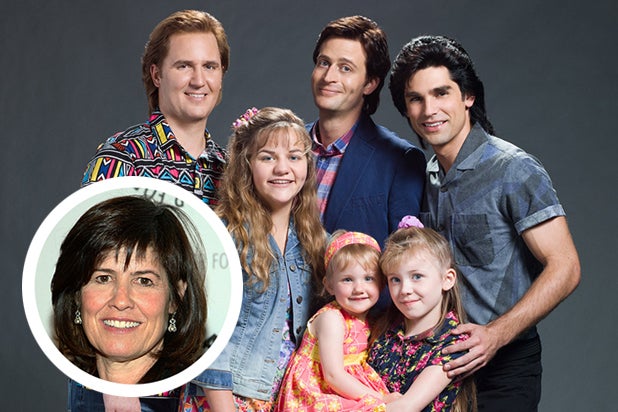 “The Unauthorized Full House Story” drew plenty of criticism when it was announced by Lifetime in April, but network executives welcome the attention.

“That’s why people are so interested in watching these movies — poking fun at them,” Lifetime’s senior vice president of original movies Tanya Lopez told TheWrap.

“That’s part of the entertainment value. We know what they are,” she said. “It’s not like everyone is exposing us to the fact that there is some silliness and some winks in these films. We’re in on it.”

Lopez said she understands comparisons between the network’s “Unauthorized” films and Syfy’s “Sharknado” franchise. “It’s not as though [Syfy] is looking at the films as being any more than what they are,” she said. “I’m not putting these up for an Emmy nomination. But there’s a lot of things out there on television that we all watch and may not admit to.”

And people are watching. When Lifetime debuted “The Unauthorized Saved by the Bell Story” in September 2014, the behind-the-scenes account of the popular 1990s sitcom drew 1.6 million viewers in its initial airing.

Though not the best debut for an original movie in network history, it did in fact outperform the premiere of “Sharknado,” which drew in only 1.3 million viewers initially. And according to Lifetime, 45 percent of those who watched “The Unauthorized Saved by the Bell Story” were people who had never watched a Lifetime movie before.

“It was right about then we said, ‘You know, this may be something,'” Lopez said. “And we talked about it being a brand strategy for us — to find those movies that could bring in a younger audience and complement some of the things that were going on in our programming.”

Also Read: 'The Hills' Creator Liz Gateley Takes the Reins at Lifetime: Inside Her Plan for 'Loud Shows With Heart'

In addition to “The Unauthorized Full House Story,” Lifetime will also premiere “Unauthorized” movies about “Beverly Hills 90210” and “Melrose Place” in October.

But while “The Unauthorized Saved by the Bell Story” was based in part on a book written by one of the show’s original stars, Dustin Diamond, screenwriter Ron McGee had to get a bit more creative for this latest project.

Not surprisingly, the original cast of “Full House” was unwilling to participate — no doubt worried about personal stories that Lifetime might use as well as stealing the thunder from the upcoming Netflix spinoff series “Fuller House.” “I think there wasn’t the trust there that we were doing a bit of a love letter to them, that we were really tapping into what made everybody feel good when they were watching ‘Full House,'” Lopez said.

So McGee relied on old interviews and stories he found in public records. “John Stamos was really out there when he was dating and married to Rebecca Romijn,” Lopez said. “Bob Saget was very verbal about how he was conflicted about his standup work and that persona versus the persona he was having to portray in ‘Full House.’ So we didn’t go into anything that felt like there was a deep dark secret.”

"The Unauthorized Melrose Place Story" will premiere on Lifetime on October 10. Lifetime

Dylan Everett
Who He's Playing: Mark-Paul Gosselaar
Where You Might Have Seen Him: "Degrassi: The Next Generation," "Wingin' It"
Fun Fact: Canadian!
View In Gallery
View In Gallery