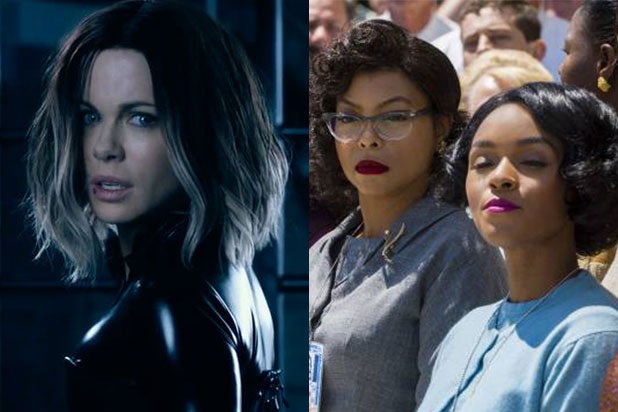 The Force will still be with “Rogue One: A Star Wars Story” this weekend, but it might see some opposition from “Hidden Figures” going wide and newcomer “Underworld: Blood Wars.” But analysts say the “Star Wars” prequel will stay at No. 1 for the fourth weekend in a row.

“Rogue One,” which opened on Dec. 16. and has grossed $447 million domestically so far, is set to take the weekend with another $25 million to $30 million, and is expected to cross the $500 million domestic mark.

“Hidden Figures,” Fox’s film about three female NASA mathematicians, will most likely take the second spot as it expands this weekend, with tracking ranging anywhere between $16 million to $21 million, although the studio is being a little more conservative with a $15 million to $17 million estimate. Starring Janelle Monae, Taraji P. Henson and Octavia Spencer, the film holds a fresh rating of 92 percent on Rotten Tomatoes and was produced for $25 million. It has earned $2.7 million in limited release so far.

Kate Beckinsale is reprising her role as Selene in Screen Gems’ “Underworld: Blood Wars,” which is opening domestically after having grossed $45 million internationally to date.

With a budget of $35 million (“Underworld: Awakening” was produced for double that), the studio is expecting a low to mid-teen gross this upcoming weekend when it opens in 3,065 North American locations.

However, box office experts say that the power of “Underworld” should not be underestimated. After all, “Evolution” in 2006 opened to $26.9 million and “Awakening” grossed $25.3 million in 2012. Because of this, analysts say we could expect a gross between $17 million to $20 million.

Theo James, Lara Pulver, Tobias Menzies, Charles Dance and Bradley James costar in the Anna Foerster-directed film, which follows Selene as she fends off brutal attacks from the Lycan clan and the Vampire faction. Reviews haven’t been great,however, and it has a score of 10 percent on Rotten Tomatoes.

Focus Features’ “A Monster Calls” is expanding to 1,500 U.S. theaters this weekend, with Thursday previews starting at 7 p.m. As of Monday, the film had grossed $81,609 from just four theaters and has received critical praise – it currently holds a score of 89 percent on Rotten Tomatoes.

Analysts have the film starring Felicity Jones, Lewis MacDougall and Sigourney Weaver coming in at under $10 million. The film was produced for $43 million.