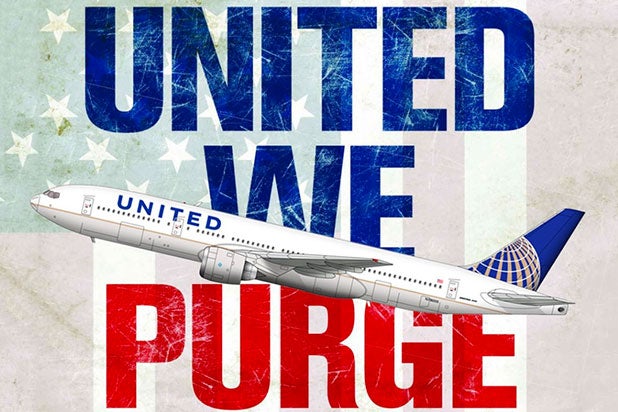 #NewUnitedAirlinesMotto is trending on Twitter following surfaced videos in which a man was forcibly dragged off an “overbooked” flight.

People created new slogans for the company, which include “United We Purge,” “Not Enough Seating? Time for a Beating!” and “Our Service Will Knock You Out.”

“We put the hospital in hospitality,” read another.

A video posted by Audra D. Bridges went viral early Sunday night in which security agents drag a screaming passenger from the overbooked flight. A United spokesperson told TheWrap in an email Monday morning that the passenger had been taken off the flight because it was overbooked.

The Chicago Police also released a statement in which they stated that a “69-year-old male Asian airline passenger became irate after he was asked to disembark from a flight that was oversold. The passenger in question began yelling to voice his displeasure, at which point Aviation Police were summoned.”

In a statement, United CEO Muniz said, “I apologize for having to re-accommodate these customers. Our team is moving with a sense of urgency to work with authorities and conduct our own detailed review of what happened.”

The incident comes two weeks after United Airlines prevented two 10-year-old girls from boarding a flight because they were wearing leggings.

"Thank you for flying United and may the odds be ever in your favor." #NewUnitedAirlinesMottos

Not Enough Seating?
Time For A Beating!#NewUnitedAirlinesMottos

We have knock out customer service! #NewUnitedAirlinesMottos

Our service will knock you out#NewUnitedAirlinesMottos

#NewUnitedAirlinesMottos
We put the hospital in hospitality

#NewUnitedAirlinesMottos though our prices are unbeatable, we can't say the same for our passengers