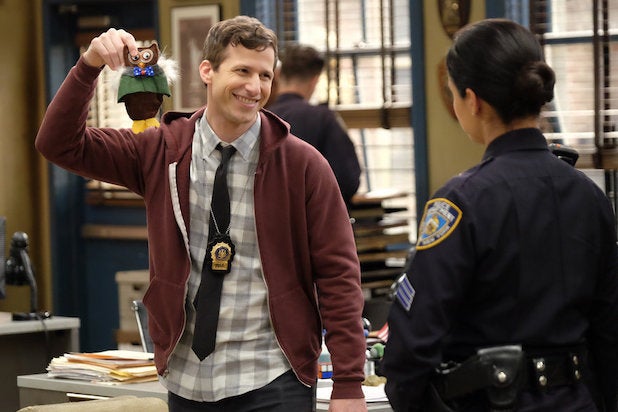 Universal Television has extended the holiday hiatus on six series productions, including “Brooklyn Nine-Nine” and “Good Girls,” amid the COVID-19 spike in Los Angeles, the company announced on Thursday.

Other affected series include “Hacks,” “Never Have I Ever,” “Mr. Mayor” and “Kenan.” The studio expects to resume production on all series on Jan. 11, except for “Brooklyn Nine-Nine,” which will start back on Jan. 18.

The six Universal Television series are just the latest in a string of shows to delay their post-holiday returns to production amid the rising coronavirus cases in Los Angeles County. Earlier this week, CBS Television Studios pushed the return dates for programs that were scheduled to resume shooting next week, including “NCIS,” “SEAL Team,” “Why Women Kill” and “Diary of a Future President.”

Also on Thursday, Warner Bros. extended the holiday hiatus for seven of its L.A.-based series, including “Shameless,” “You” and “Mom.”

In a letter to film industry contacts last week, the Los Angeles Department of Public Health urged Hollywood studios to pause their productions as the county continues to grapple with the pandemic.

“Although music, TV and film productions are allowed to operate, we ask you to strongly consider pausing work for a few weeks during this catastrophic surge in COVID cases. Identify and delay higher risk activities, and focus on lower-risk work for now, if at all possible,” read the letter, which was made public by FilmLA on Tuesday.