Zonko’s joke shop — featuring goodies like Extendable Ears or Sneakoscopes — an Owlery and the Dragon Challenge, a twin high-speed roller coaster with elements from the Triwizard Tournament, are among the attractions at Universal’s new 20-acre, $265 million "Wizarding World of Harry Potter" theme area at Universal Studios Islands of Adventure in Orlando. 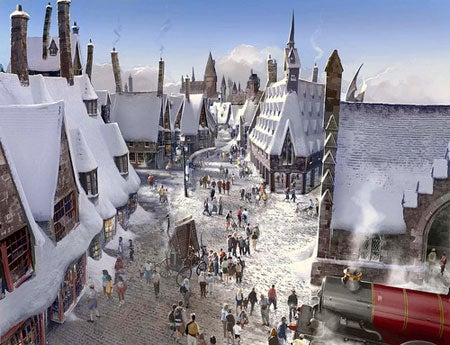 Details of the park, set to open in spring 2010, were announced by Universal on Tuesday.

The area will host attractions, shops and even a restaurant all inspired by J.K. Rowling’s popular book series. Rowling and Warner Bros. — who produced the "Harry Potter" films — collaborated with the resort to make sure the new attractions stay true the the franchise.

"All of the action and adventures of Harry Potter’s world will come to life here at Universal Orlando Resort," Tom Williams, chairman and CEO, Universal Parks and Resorts, said in a statement. "The Wizarding World of Harry Potter will be unlike any other experience on earth and we can’t wait to see the looks on our guests’ faces as they enter this rich environment."

Among the attractions announced Tuesday:

Guests will be greeted at the entrance of Hogsmeade (pictured above) by a whistle welcoming the Hogwart’s Express into the station. 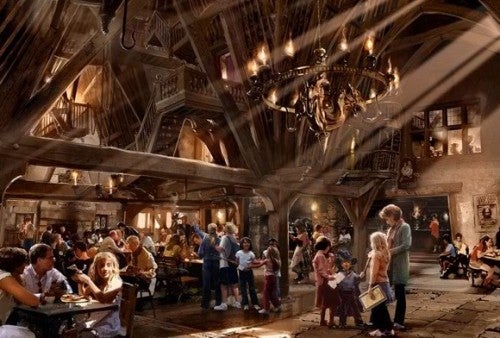 Across the way will be a joke shop called Zonko’s, where guests can purchase Harry Potter goodies like Extendable Ears or Sneakoscopes. There’s also a magical selection of wands available at Ollivanders wand shop and Spectrespec instruments and Quidditch equipment up for grabs at Dervish and Banges.

Meanwhile, Filch’s Emporium of Confiscated Goods will sell even more Ministry of Magic merchandise like Omniculars.

Visitors will be able to grab a bite at Three Broomsticks (above) and the Hog’s Head Pub, where they can drink Butterbeer and pumpkin juice, or grab some of Bertie Bott’s Every-Flavour Beans at treat shop Honeydukes.

At the Owlery, owls roost and await their next delivery to the Owl Post, which sends letters with certified Hogsmeade postmarks and sells official resort stamps.

And then there are the rides — the Dragon Challenge, a twin high-speed roller coaster with elements from the Triwizard Tournament and the Flight of the Hippogriff, a family coaster simulating a Hippogrif training flight.

On Harry Potter and the Forbidden Journey in Hogwarts castle, new technology will bring the characters to life in fresh ways.

"The Wizarding World of Harry Potter is yet another way that fans will be able to experience and enjoy Harry Potter for many years to come," added Diane Nelson, President of DC Entertainment, who is also responsible for overseeing the Harry Potter brand team worldwide.
"The power of this brand speaks for itself, as the enthusiasm of our dedicated fans around the world continues to grow even stronger as we move into the future."
FEATURED VIDEO (SPONSORED)
x
Looks like you're enjoying reading