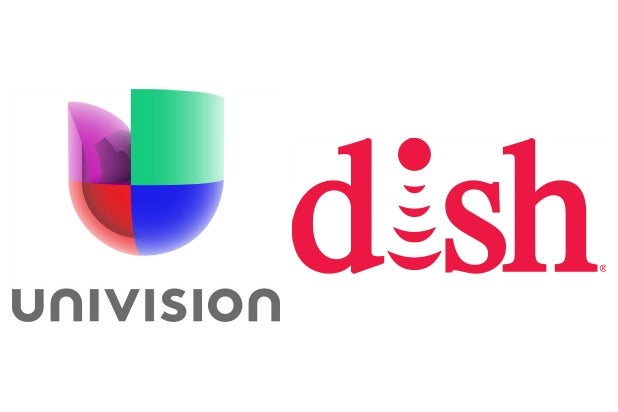 UPDATE: Univision has ceased service on more than 60 stations programmed for the Dish Networks, and blocked Sling customers from accessing its channels on the network. Univision issued another statement in response to the DISH blackout:

It is outrageous that DISH has rejected our offer of a two-week contract extension to allow its customers and our viewers to continue to have access to Univision’s highly rated networks and stations. While DISH has routinely used blackouts against broadcasters–its 68 broadcast blackouts since 2010 are significantly more than any other distributor in that time — Univision expected DISH to take our negotiations and its commitment to Hispanic consumers seriously when it told its customers this week that it wanted to “reach a mutually beneficial deal” for Univision’s “high quality content.”

Instead of fulfilling its promise to its customers, DISH has chosen to devalue our programming, disingenuously offering a fraction of what it pays our English-language peers. We stand ready to continue negotiations and enter into a short-term extension to restore service, especially with DISH customers missing our coverage of the Mexican Presidential Election, which many are calling “the biggest election in Mexican history.” DISH should do right by its Spanish-speaking audiences, agree to restore service, and negotiate a good faith agreement.

PREVIOUSLY: Negotiations between Univision and Dish have reached an apparent impasse, as the two companies have released competing statements blaming each other for the breakdown.

Late Friday, Dish released a statement saying Univision made an “abrupt departure” from the negotiating table in their ongoing carriage dispute.

“Univision is calling for price hikes designed to impact the Latino market we have served for more than 20 years,” said Alfredo Rodríguez Diaz-Marta, Vice President of DishLatino and Sling Latino. “We are disappointed and saddened by Univision’s threats to block our customers from Univision news and entertainment content, especially during such challenging times.”

The company also accused Univision of making “untenable demands” and slow-walking the negotiations. According to Dish, Univision is asking for a 75 percent increase in retransmission fees. The company pointed to Univision’s declining ratings and failure to secure the rights to the next three World Cups as the reasons those demands are unreasonable.

Dish also took issue with Univision’s subscription offering, Univision Now, being priced at $7.99 a month, nearly 50 percent less than what Univision is asking Dish to pay to make the same content available to its customers.

“Univision is dealing with tremendous uncertainty as it faces significant business challenges, including its failure to secure rights for the World Cup,” said Rodríguez Diaz-Marta. “A massive price increase on our customers is not a path forward; we remain unwavering in our commitment to those we serve. We hope Univision will reconsider its demands and help us reach a swift, fair resolution.”

Univision fired back with its own statement on Saturday, disputing Dish’s claim that it had ended negotiations.

“Univision has not left the table and is prepared to continue negotiating when DISH shows that it is serious about paying fair value for our services,” the broadcaster said. “DISH insists on paying Univision only a fraction of what it pays our English-language peers. DISH’s latest offer to UCI is an insult to our viewers, who depend on us for vital news and information that we provide like no other. DISH is just going through the motions and has provided hollow offers that hardly represent true negotiations.”

The company also said Dish’s claim about Univision’s declining ratings does not fully reflect the network’s value to its customers. According to Univision, its viewers make up 60 percent of the Spanish-language for Dish’s DishLatino service.

“We remain ready and willing to negotiate with DISH, but we will not roll over and let them continue to devalue the programming our already-underrepresented community relies on. Given the fact that our networks perform extremely well on their service, the question becomes: why doesn’t DISH treat Univision fairly?”