It was originally reported Sunday that the film only grossed $73 million in North America.

The movie’s international premiere number was also upped to $165.5 million from $159.2 million, giving it a global opening of $242.5 million.

With the East Coast hit hard by storm activity, and slowing "Avatar’s" Saturday performance, the film just missed out on becoming the all-time top December opener in North America — "I Am Legend," which did $77.2 million on the same weekend two years ago, still owns that distinction.

Even the King of the World gets trumped by Mother Nature. 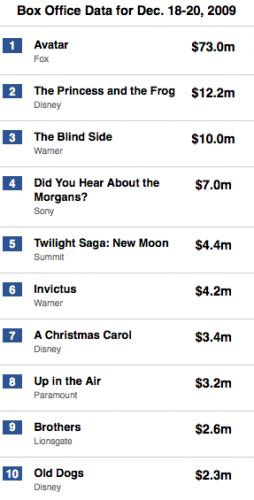 With snow showers and freezing temperatures paralyzing much of the East Coast, the premiere box-office total of James Cameron’s highly anticipated 3D epic "Avatar" was slowed a bit.

The Fox film opened to a three-day domestic total of $73 million, according to studio estimates.

Numbers across the snowbound Eastern Seaboard were way down for “Avatar” on Saturday from its debut Friday, with New York declining 18 percent, Washington, D.C., down 75 percent, Philadelphia off 57 percent and Baltimore registering a whopping 86 percent drop-off.

Still, with exceptional word-of-mouth for the film, which garnered an “A” Cinemascore grade, Fox still enjoyed the second biggest December premiere ever, trailing only “I Am Legend” ($77.2 million) two years ago.

While the opening isn’t the $90 million-plus bonanza some industry watchers had speculated, “Avatar” — budgeted at what the studio says is $237 million — did beat Fox’s conservative premiere estimates of just below $60 million. Studio officials had been concerned that the movie’s two-hour, 40-minute length and its confinement mostly to the finite universe of 3D screens, would limit its potential gross initially.

“With the word-of-mouth on this movie, the business we lost yesterday we will get back in the coming days,” Fox executive VP of distribution Chris Aronson told TheWrap. “We’re going to start making it up today.”

With $159.2 million in foreign ticket sales, Aronson added, “Avatar” should finish the weekend with a global premiere of $232.2 million, what he described as the biggest worldwide opening ever for a non-sequel/non-franchise film.

Of course, other studios were calling “Nor’Easter” on their openings, too.

And, overall, the box office was actually up a whopping 52 percent overall over the same weekend last year, according to one studio’s estimate.

Warner’s “The Blind Side” continued its strong hold, dropping only 33 percent in its fifth week to finish in third place with $10 million. The Sandra Bullock movie has made $164.7 million domestically so far.

In sixth place, behind “The Morgans,” Summit’s “Twilight Saga: New Moon” is still getting enough repeat business from its rabid fan base to gross another $4.4 million, bringing its five-week domestic total to $274.6 million.

Meanwhile, Disney’s Robert Zemeckis-directed “A Christmas Carol” came in seventh, bringing in another $3.4 million, a respectable 52 percent decline in week seven, despite the fact that “Avatar” took the bulk of its 3D distribution away.

“Christmas Carol” passed the $130 million mark domestically this weekend, and now seems certain to pass $300 million globally — an important profitability benchmark for a $200 million film once deemed a flop.

That term might better apply to the Miramax’s Robert DeNiro-starring family comedy “Everybody’s Fine,” a $50 million film that finished its third weekend in 18th place with $584,000 and just $8.8 million accumulated domestically so far.

In addition to wide releases “Avatar” and “The Morgans,” the weekend saw the introduction of several more awards-aspirants making limited debuts.

David Glasser, The Weinstein Company’s president of international, said the results for "Nine" boded well for a broad opening next week on 1,350 theaters.

"We’re not counting our chickens before they’re hatched, but it was an excellent opening for the picture," he told TheWrap. "And the exit polls were great."

Among incumbent specialty films, Paramount’s Jason Reitman-directed “Up in the Air” finished in eighth place, increasing its tally 32 percent week-to-week to $927,000, while standing pat in 175 theaters. The movie, which stars George Clooney, is set to go wide this week.

Here’s a look at how the top 10 shaped up this weekend: