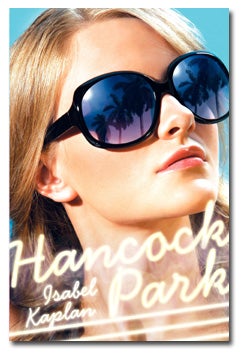 Her debut novel, "Hancock Park" — a sort of "Gossip Girl L.A." — was published on June 30 by HarperCollins’ teen imprint and is already an L.A. Times bestseller.

Kaplan, currently in D.C. interning for Congressman Edward J. Markey (D-Mass.) on Capitol Hill, is flying back to L.A. next week to meet with prospective producers.

But it’s the backstory of how she landed a book deal at 16 — something already part of Hollywood/book industry folklore — that’s worthy of a film. Or, at least a scene in one.

The story, according to Isabel, goes something like this: Judith Regan was at her mom’s house in Santa Monica for a cocktail party. Regan was introduced to Kaplan, then a high school junior.

After talking for a few minutes, Regan said, “You should write a book.”

Isabel responded: “I’ve been working on one, actually.”

She took Regan to her laptop, upstairs in her bedroom, and showed Regan a 15-page rough draft — about a 16-year-old girl struggling to stay sane at an elite private school in L.A.

“I really didn’t know who she was,” Isabel told me yesterday. “I took her to my room and opened Microsoft Word.”

A week, a meeting and a chapter outline later, Regan bought it.

Isabel added: “I know I was really lucky.”

The luck didn’t stop there: After Regan was fired from her post at HarperCollins by News Corp. for allegedly making anti-Semitic remarks (a charge News Corp. later retracted in a settlement with Ms. Regan), “Hancock Park” was one of the titles the publisher, smartly, kept.

“It took two years to get from there to publication,” Marty Kaplan explained. “When most of the books [Regan] was shepherding were cancelled, it was more good luck that Izzy’s manuscript was championed by a terrific editor there (Farrin Jacobs), who guided her through a year of revisions."

Isabel told me she hasn’t declared a major at Harvard, and isn’t sure what it will be when she does. “I’m still trying to figure that out,” she said.

In the meantime, she’s already at work on a follow-up to Hancock Park.

UPDATE: This post was updated to include details from Ms. Regan’s settlement with News Corp.